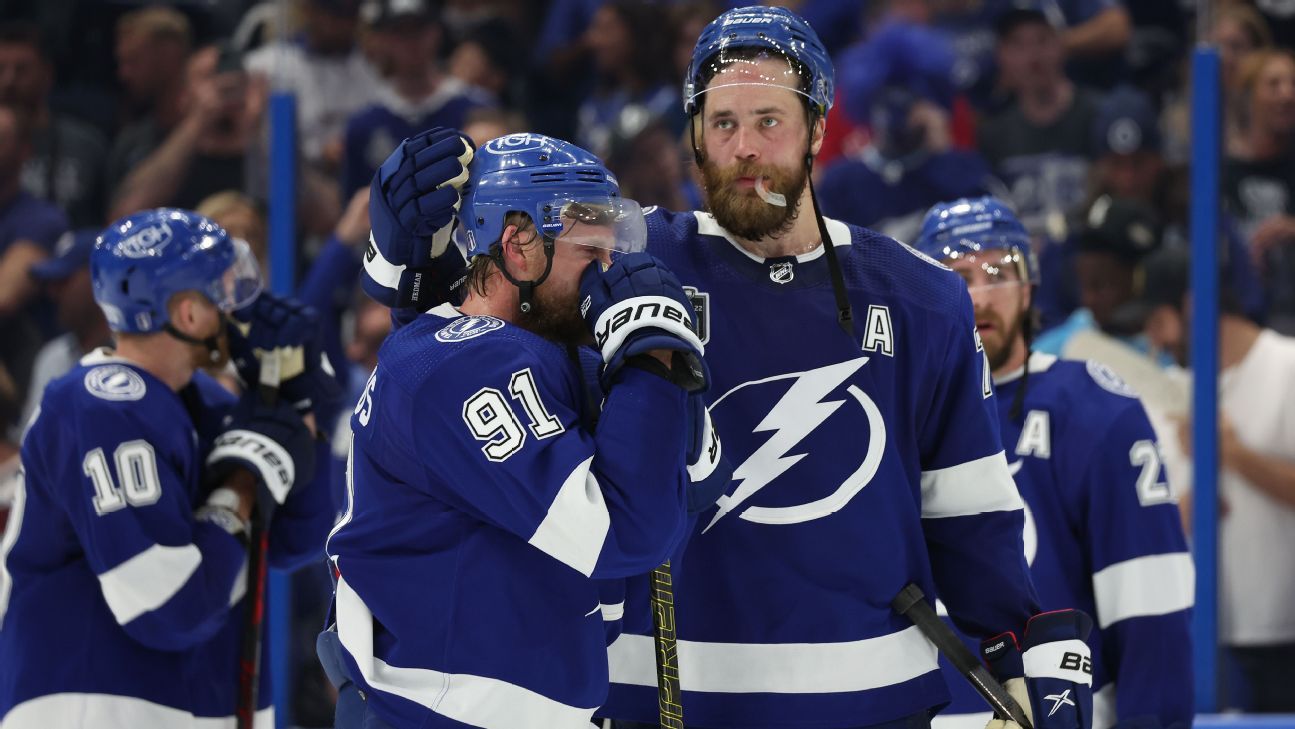 TAMPA, Fla. -- The Tampa Bay Lightning fell short of the first Stanley Cup three-peat since 1983 -- but they don't believe their dynasty has crumbled.

"Who said we're done?" Lightning captain Steven Stamkos said after his team's 2-1 loss to the Colorado Avalanche in Game 6 of the Stanley Cup Final on Sunday night. "This core is here. We've battled. We've been through everything you can think of and, for the most part, we've found a way to come out on top."

The Avalanche captured their first Stanley Cup since 2001 with the victory. They were favored to win the Cup as the playoffs began as well as to win this series.

"It's not like we lost to some powder puff," Tampa Bay coach Jon Cooper said. "That's a baller team over there. We never had home ice. We played all these star-studded teams. They found a way. We just ran into one more brick wall, and we just couldn't get through this one."

Cooper agreed with Stamkos that the Lightning's run didn't end with the Avalanche. In the past eight years, the Lightning have been to six conference finals and advanced to the Stanley Cup Final four times.

"The playoff streak ended. But it's not the end of our run," Cooper said. "I've been extremely fortunate in my coaching career to have won championships at different levels, and those are the teams you remember. Sometimes, you don't remember as much that a team didn't win. But I think I'll remember this team the most. What these guys went through, with the injuries ... it's been well-documented what kind of warriors they are. You should see what's going on [with injuries]."

The Lightning were without star center Brayden Point, who missed the previous two rounds with a lower-body injury he suffered in Game 7 against the Toronto Maple Leafs on May 14. Point played the first two games against Colorado and was ineffective, and he didn't appear in the rest of the series. Forward Anthony Cirelli and defenseman Erik Cernak played through injuries, as did a number of other players.

"When the injury report comes out, you're going to be shocked," Tampa Bay forward Pat Maroon said. "I'm just so proud of these guys for what these guys have done the last three years. We made a hell of a run. We just fell short."

The Lightning enter the offseason with a handful of free agents, including clutch winger Ondrej Palat, trade deadline pickup Nick Paul and steady defenseman Jan Rutta. But the team's core is under contract for 2022-23.

Whether they make a bid for three Cups in four seasons or not, Cooper said this group belongs among the greatest teams in NHL history.

"These guys are right up there with the 1980s Islanders and the Oilers," he said. "Teams that you talk about for decades."

More in this category: « Avs claim first Cup since '01; Makar playoff MVP Lightning deal McDonagh to Preds for 2 players »
back to top