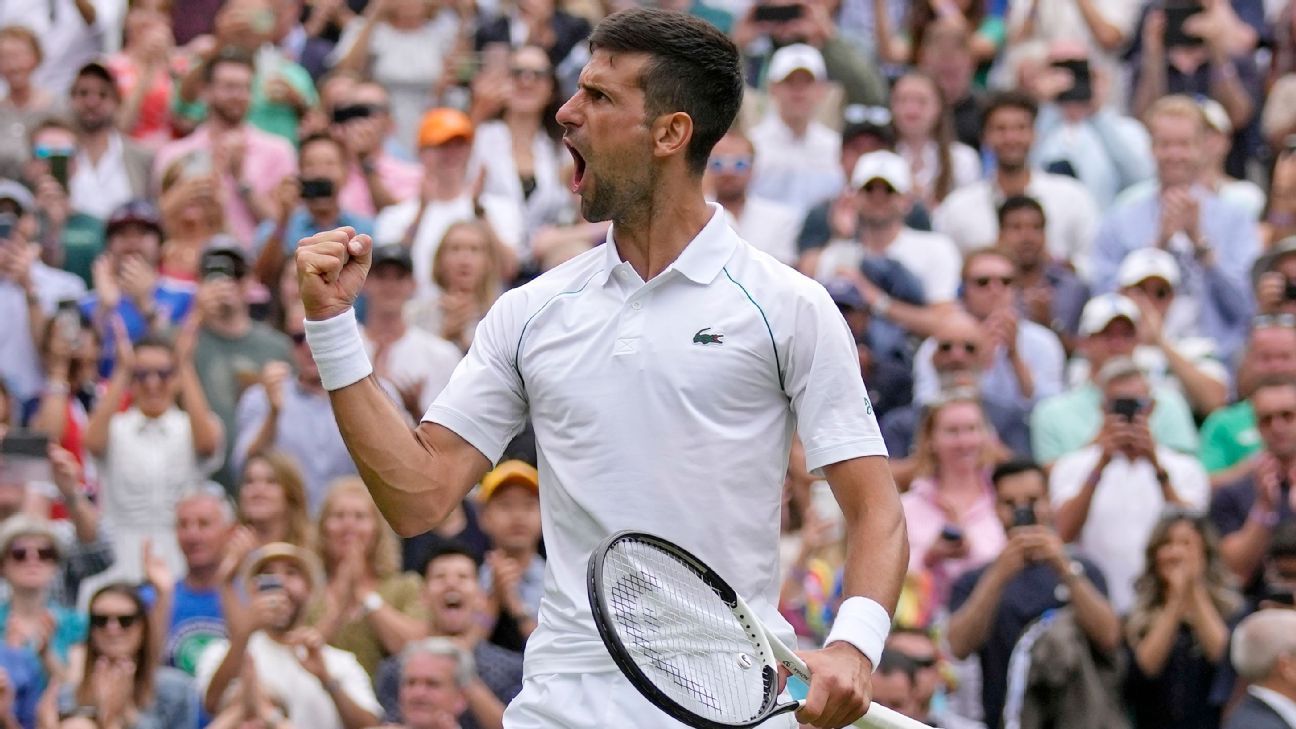 LONDON -- It says a lot about Novak Djokovic that a two-sets-to-none hole at Wimbledon on a day he was hardly at his best never seemed insurmountable. Not to him. Not to anyone watching.

Djokovic spotted 10th-seeded Jannik Sinner of Italy the huge lead Tuesday, then worked his way back to win 5-7, 2-6, 6-3, 6-2, 6-2 at Centre Court, earning an 11th semifinal berth at Wimbledon with his 26th consecutive victory at the grass-court Grand Slam tournament.

"I always believed," said Djokovic, who faces ninth-seeded Cam Norrie of Britain next, "that I could turn the match around."

Among men, only Roger Federer has made more semifinal appearances at Wimbledon with 13 and won more championships (eight) than the seven Djokovic could reach by lifting the trophy Sunday for what would be a fourth year in a row.

"He makes you play differently -- well, not differently, but in a way that he likes," Sinner said.

"Can't enjoy it too much now," said Norrie, 26, who was born in South Africa to British parents, grew up in New Zealand and played college tennis at Texas Christian University. "Just get ready for Novak in a couple days."

Djokovic, a 35-year-old from Serbia, managed his seventh career comeback in a match in which he trailed by two sets -- he last did it in the 2021 French Open final against Stefanos Tsitsipas -- and improved to 37-10 in five-setters. That includes a 10-1 mark in matches that go the distance at Wimbledon, including nine straight victories; the lone loss came in 2006.

"He's been in this situation many times," the 20-year-old Sinner said. "That definitely helps."

Sinner has shown enormous potential, reaching the quarterfinals at the 2020 French Open before losing to Rafael Nadal and the 2022 Australian Open before losing to Tsitsipas. As for grass? Sinner was 0-4 until last week. But he got win No. 1 at Wimbledon by eliminating three-time major champion Stan Wawrinka and then beat a pair of seeded foes: No. 20 John Isner and No. 5 Carlos Alcaraz.

With his wide wingspan, and a Djokovic-style ability to slide into strokes, the 6-foot-2 (1.88-meter) Sinner gets to balls that appear out of reach and is able to reply with considerable power. That allows him to lengthen exchanges and make even a consummate baseliner like Djokovic put in extra work to earn a point.

On Tuesday, Sinner went up a set and a break when Djokovic sailed a backhand long, then bowed his head. Sinner broke again for 5-2, and soon enough, 1½ hours in, was a set from the biggest triumph of his nascent career.

Before the start of the third, Djokovic headed toward the locker room for a bathroom break, just like he did at Roland Garros against Tsitsipas 13 months ago.

"You approach these particular situations when you're two sets down a bit more calmly, a bit more confident," Djokovic said, "with more self-belief."

When play resumed, Djokovic was so much better than he had been.

After 19 unforced errors over the initial two sets, he made 14 over the final three. After getting broken four times over two sets, he won all 13 of his service games the rest of the way.

He became increasingly animated, too. Djokovic shook a fist and yelled after breaking twice to move out to a 3-0 edge after 20 minutes in the third set.

"He was dictating more," Sinner said.

After landing on his stomach following a slide that turned into the splits on a backhand in the fifth set, Djokovic spread his arms out wide like a child pretending to be an airplane -- or a baseball umpire calling a runner safe.

Sinner's play, meanwhile, dipped. His form at the net, so good early, faltered: He was successful on 14 of 17 trips forward over the first two sets but 8 of 18 in the last three. He caught a toe in the grass and turned his left ankle on one push forward, falling and immediately clutching his ankle; Djokovic climbed over the net to help Sinner get up. That did not seem to affect Sinner's footwork, though.

Djokovic was simply a lot to deal with.

More in this category: « Tiger finishes with 74 at pro-am; Schauffele wins Bears WR Harry out indefinitely after surgery »
back to top