Jets: Wilson timeline will depend on knee scope 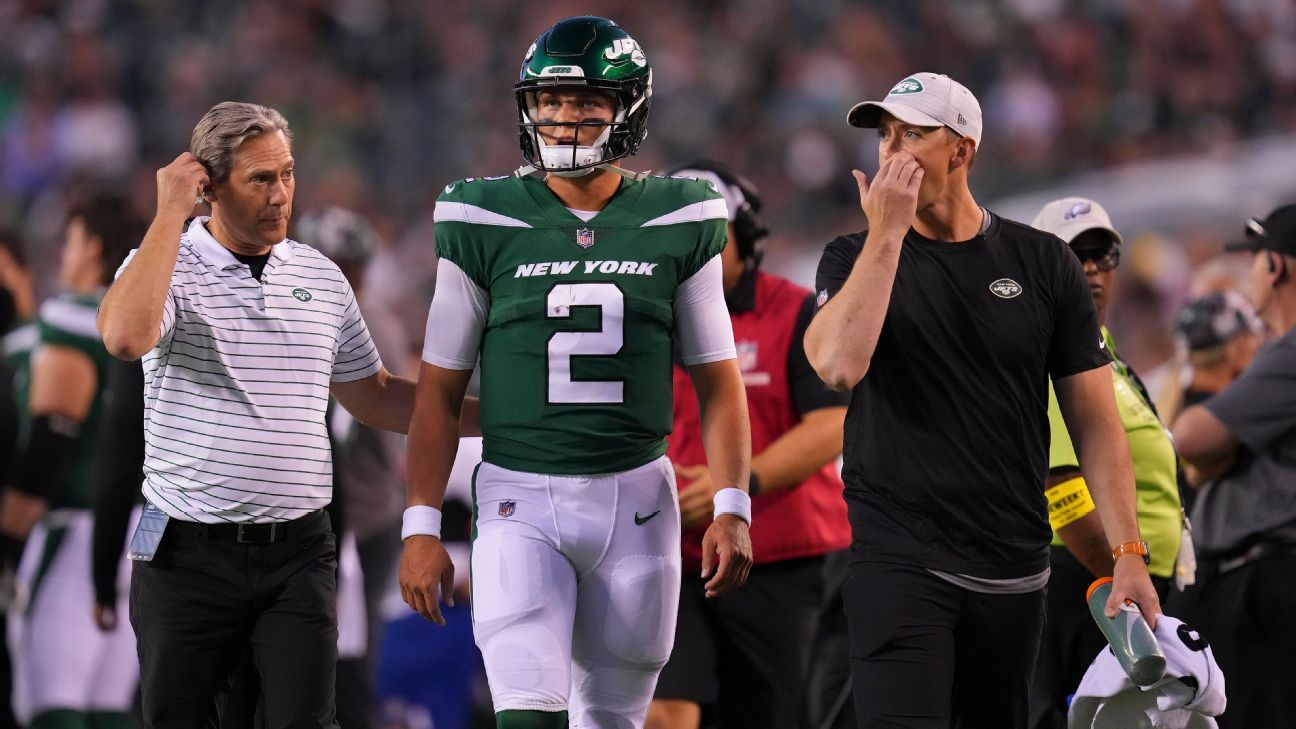 FLORHAM PARK, N.J. -- The New York Jets were non-committal on a timetable for injured quarterback Zach Wilson, saying it depends on the outcome of arthroscopic knee surgery Tuesday in Los Angeles.

"We're optimistic, but he's not out of the woods until they get in there and make the decision (on how to handle the meniscus)," coach Robert Saleh said Sunday.

Wilson, injured in Friday night's preseason game against the Philadelphia Eagles, is expected to miss two to four weeks with a bone bruise and torn meniscus, sources said Saturday. That projection was based on an MRI exam. The current belief is that the meniscus needs only a "trim," not a full repair, a source said.

The team is hopeful that it won't be longer than four weeks, but it won't give an absolute until the scope, which will be performed by knee expert Neal ElAttrache, the team physician for the Los Angeles Rams and Los Angeles Dodgers.

ElAttrache also will have a consultation with injured right tackle Mekhi Becton (knee), who is expected to miss the entire season.

While the Jets were relieved to learn that Wilson's injury isn't season ending, they acknowledged it could hamper his development early in the season. He will miss the final two preseason games, plus joint practices against the Atlanta Falcons and New York Giants.

"It's a setback in that he's missing an unbelievable opportunity to get the reps in, to play other defenses, especially the Giants, who have such as elaborate pressure-package system. He has to get dialed in, just like he did last year when he was hurt.

"The timing of it all is terrible and it sucks, but I think Zach still has an opportunity to grow from it if he attacks it mentally."

Wilson, drafted second overall in 2021, missed four games as a rookie after spraining the PCL in his right knee -- the same knee he hurt against the Eagles on a non-contact play in which he scrambled instead of running out of bounds.

Backup Joe Flacco, who took the first-team reps in practice, said Wilson was "a little down" after the game, adding that his mood had brightened by Sunday.

"I think, considering what happened, we got pretty good news," said Flacco, who has started only 13 games since being benched in 2018 by the Baltimore Ravens -- the Jets' Week 1 opponent. "I think he's in good spirits today."

Realistically, it probably will be Flacco against the Ravens, considering there will be a ramp-up period for Wilson. Saleh acknowledged the organization has to be careful not to rush him back, calling it a "valid" issue that will be discussed once the surgical procedure is complete.

The quarterback, whether it's Wilson or Flacco, will be behind a new-look offensive line. The team responded to Becton's injury by signing former Pro Bowl tackle Duane Brown to a two-year, $22 million contract. There was some question as to where he'd line up, but he will remain a left tackle, Saleh confirmed Sunday.

Brown, who agreed to terms last Thursday, is expected to arrive Sunday night to sign his contract. He should start practicing this week.

That means moving George Fant to right tackle, a potentially awkward situation. The coaches spent the offseason gushing about Fant's performance last season at left tackle. In fact, they anointed him the 2022 starter at the beginning of training camp, moving Becton -- a 2020 first-round pick -- to right tackle.

Previously, Fant said his preference was to remain a left tackle. He has played better on the left side than the right, Saleh acknowledged. Rationalizing the move, Saleh said Fant hasn't had a real chance to play right tackle in the Jets' current scheme (except for two quarters in the 2021 opener). They believe this scheme, as opposed to the previous one, will accentuate his skills.

The other factor: Brown has started at left tackle in every game of his career (203).

"His curse is also a blessing," Saleh said of Fant, who is seeking a contract extension. "He's extremely versatile, very athletic. And he's a team guy. ... He just wants a home."

More in this category: « Sources: Jets QB Wilson set to miss 2-4 weeks How to watch the Tour Championship on ESPN+ »
back to top