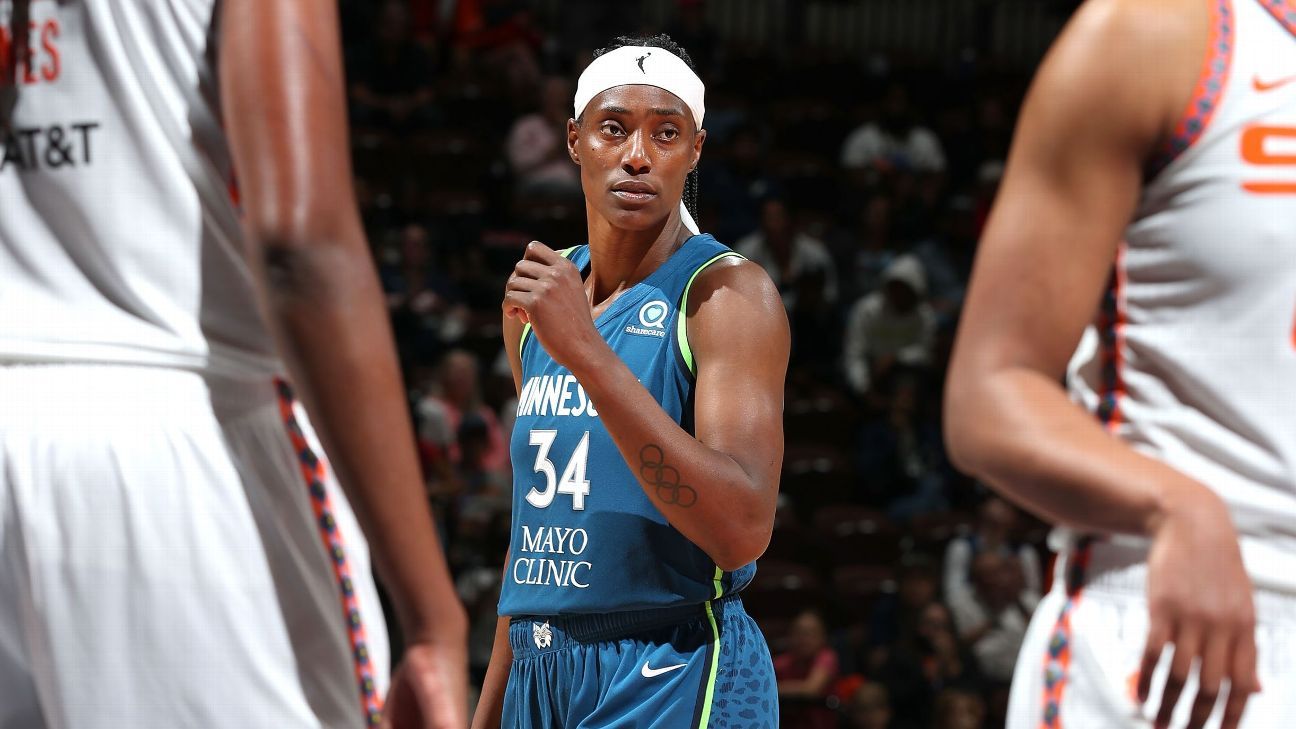 UNCASVILLE, Conn. -- WNBA all-time great Sylvia Fowles concluded her career Sunday as the Minnesota Lynx fell 90-83 to the Connecticut Sun in their regular-season finale, eliminating the Lynx from playoff contention.

Following a roller coaster season in which they spent much of the summer in the bottom two of the standings, the Lynx recovered and managed to put themselves within reach of the playoffs, which they could have made with wins Friday against the Seattle Storm and Sunday against the Sun.

After Friday's loss, an emotional day with it being Fowles' final home game at the Target Center, Minnesota needed a win over Connecticut, plus help from other teams, to extend its season and Fowles' career.

But aside from a valiant fourth-quarter comeback effort in which they pulled within four points with three minutes to play, the Lynx were never in control, trailing by as many as 19 and by double figures most of the way.

"It was what you hoped wasn't going to happen," Lynx general manager/head coach Cheryl Reeve said. "It just wasn't meant to be."

With 43 seconds remaining in the game, Fowles exited the floor for the final time in her decorated career to a standing ovation from the Mohegan Sun Arena crowd, embracing each person on the bench, from an extended embrace with Reeve to a moment with Lynx trainer Chuck Barta.

But true to form for Fowles -- who's called Mama Syl or Sweet Syl across the league -- she wasn't thinking then about the personal implications for her career, but about her teammates.

"I was a little annoyed with myself because I had a s---ty three quarters and I felt like I did them a disservice," Fowles said of when she exited the game. "And so I just was a little frustrated and emotional at the same time."

"In typical Syl fashion, she just thanked us for being her teammates and supporting her throughout the season and then the staff and the coaches and all of that," added teammate Lindsay Allen, who finished with a career-high 26 points. "She was just very grateful to be able to do it with us this season through the ups and downs and everything that the season entailed."

Fowles wasn't quite her dominant self in her final game, with Reeve admitting she was "a mess," perhaps because she just wanted to do so well. Fowles was limited to three points through the first 30 minutes before finishing with 10 points and 12 boards, but her stacked résumé encapsulating winning and dominance had been cemented well before Sunday's disappointing result.

Still, there were reminders of her greatness, even if Fowles' performance was "s---ty" by her standards. Fowles fittingly managed to record her league-best 193rd career double-double and became the first WNBA player to record 4,000 rebounds, which she grabbed in the second quarter.

On enemy turf, Fowles' status as a beloved figure in the league was on full display. The Mohegan tribe honored her before tipoff with a robe, pajamas and slippers for her impending retirement. Sun players and staff paid their respects to Fowles both before and after tip. In one exchange, Fowles lightly rubbed Sun guard Bria Hartley's injured knee, as if to help heal it from her recent ACL tear.

Fowles ends her career with 6,415 points on 59.9% shooting from the field, 4,006 rebounds and 721 blocks in 15 seasons. After arriving in Minnesota in 2015 from Chicago, where she played the first seven seasons of her career, Fowles helped turn the Lynx into a dynasty that won four titles in seven years.

She was a two-time Finals MVP when Minnesota won it all in 2015 and 2017, the latter the season where she also won league MVP. The 2008 No. 2 overall draft pick out of LSU, Fowles also took home defensive player of the year four times and became the league's all-time leading rebounder in 2020. On the international stage, she helped the U.S. national team win four Olympic goals, including most recently in Tokyo.

Though the franchise hoped to send Fowles -- who in February announced she'd retire at the end of the 2022 season -- off with yet another postseason berth, the season went awry from the start. Napheesa Collier missed all but the final four regular-season games because of pregnancy/maternity leave. The backcourt was overhauled just before the season, free agent acquisition Angel McCoughty agreed to a contract buyout two games in and Natalie Achonwa (injury) and Damiris Dantas (personal reasons) each missed significant time.

Even Fowles was sidelined multiple weeks with a cartilage injury in her right knee that she has had to play through in the final months.

Fowles added: "I learned that this team is going to be different and a little more challenging, so I had to do things that were out of my comfort zone, which I'm gratefully happy that I stepped out of my comfort zone for this team. But also just appreciating the love that I got from the fans this year. It put things into a different perspective for me. I never got that in my first 14 years of playing and so to see that all come together in my last year, I'm very grateful."

The entirety of the moment seemed to hit Fowles at various points Sunday. As she bowed her head during the Sun's starter introductions. As she buried her face in a towel after sitting on the bench for the final time. As she jogged off the floor, waving back to the Mohegan Sun crowd.

Still, Fowles, who plans on becoming a mortician with her basketball career behind her, says she'll need to sift through all the emotions of the day, and of a historic career.

"I think that's something I'll do later," Fowles said. "I think most of my emotions just were to be grateful. The fans were amazing tonight, Connecticut played well, but I also want to be respectful of my teammates' time too."

More in this category: « Stoops on Calipari football dig: 'I stay in my lane' How to watch the Tour Championship on ESPN+ »
back to top