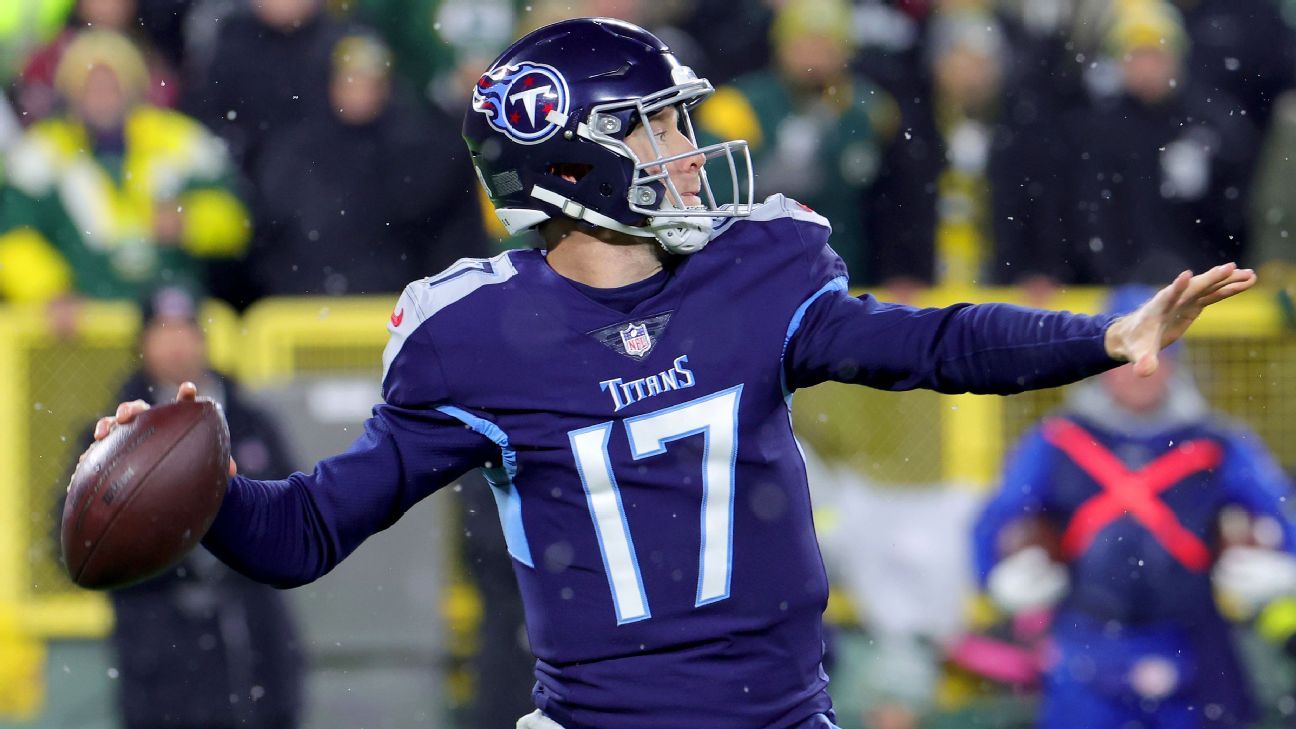 GREEN BAY, Wis. -- The Tennessee Titans handled business Thursday on the road against the Green Bay Packers in a 27-17 win at Lambeau Field.

A big play put things away as Titans rookie receiver Treylon Burks hauled in a 51-yard pass that allowed the Titans to kneel out the clock.

The Titans (7-3) brought the fight to the Packers. Quarterback Ryan Tannehill led the way with his best game of the season going 22 of 27 passing for 333 yards, two touchdowns and an interception to provide balance to the offense.

Running back Derrick Henry rushed for 87 yards on 28 carries and a touchdown. He now has over 1,000 rushing yards on the season. Henry also had 45 yards on two catches, and he threw a 3-yard touchdown pass to Austin Hooper. He joined San Francisco 49ers running back Christian McCaffrey as the only non-quarterback to have a passing and rushing touchdown in a game this season.

Promising trend: The Titans' receivers impacted the game for the second consecutive week. Rookie Treylon Burks got things started with a 43-yard reception that set up Tennessee's first touchdown on the opening drive. Burks finished with seven receptions for 111 yards, both of which were a career high. Robert Woods chipped in with six catches for 69 yards.

QB Breakdown: Tannehill was ultra-efficient. Most of his big plays came off of play-action, where the Packers were focused on stopping Henry. He delivered perfect passes to Burks on the big play and Chigoziem Okonkwo for another, and he threaded the needle between two defenders to Hooper for a 16-yard touchdown. Tannehill's passes hit his receivers in stride, giving them a chance to gain yards after the catch. It was his second consecutive game with at least 250 passing yards and two touchdown passes.

Pivotal play: The Packers closed the gap to 14-9 on a 39-yard field goal attempt by Mason Crosby. Tannehill found Okonkwo for a 31-yard completion two plays after the kick return. Okonkwo managed to haul in the Tannehill pass and stay in bounds as he fell to the ground after Packers safety Darnell Savage bit on the underneath route leaving him wide open. The play flipped the field after Tennessee was pinned back at its 12-yard line.

Goodnight Green Bay. There will be no encore. The good vibes around the Packers lasted all of four days after beating the Dallas Cowboys on Sunday to end a five-game losing streak.

With the Philadelphia Eagles up next, this has the makings of another losing streak. At 4-7, the Packers might be one more loss away from this becoming a lost season. One of the few good things to come out of this game was the continued emergence of rookie receiver Christian Watson, who's two touchdown catches put him at five in the last two games. Watson finished with 48 yards on four catches and the two scores.

Eye-popping NextGen stat: Watson's 14-yard touchdown catch was the very definition of a tight-window throw. According to NFL NextGen Stats, Watson had 0.5 yards of separation from Titans cornerback Kristian Fulton. That's the least separation of any of Rodgers' 55 touchdown passes over the last two seasons.

Describe the game in two words: Defensive breakdowns. A busted coverage against a rookie tight end, Okonkwo, for 31 yards, missed tackles on a 42-yard screen pass to Henry and then getting completely fooled on a jump pass from Henry to Hooper all happened on the same drive in the third quarter and led to a game-breaking touchdown. In some ways, breakdowns have been THE story of defensive coordinator Joe Barry's unit most of the season.

Silver lining: The return of Randall Cobb made a difference -- and not just as a receiver. Cobb had a team high in receptions (six) and yards (73), and he also returned punts and recovered an Aaron Jones fumble that helped the Packers to their first touchdown of the game. Cobb had missed the last four games while on injured reserve because of a sprained ankle. He was activated to the roster just hours before kickoff.

Under the radar stat: Thursday marked the fifth straight loss as a favorite for the Packers, which is their longest losing streak as a favorite within a season.

More in this category: « Follow live: Henry, Titans take on Packers at Lambeau Messi: Argentina have finally arrived at WC »
back to top