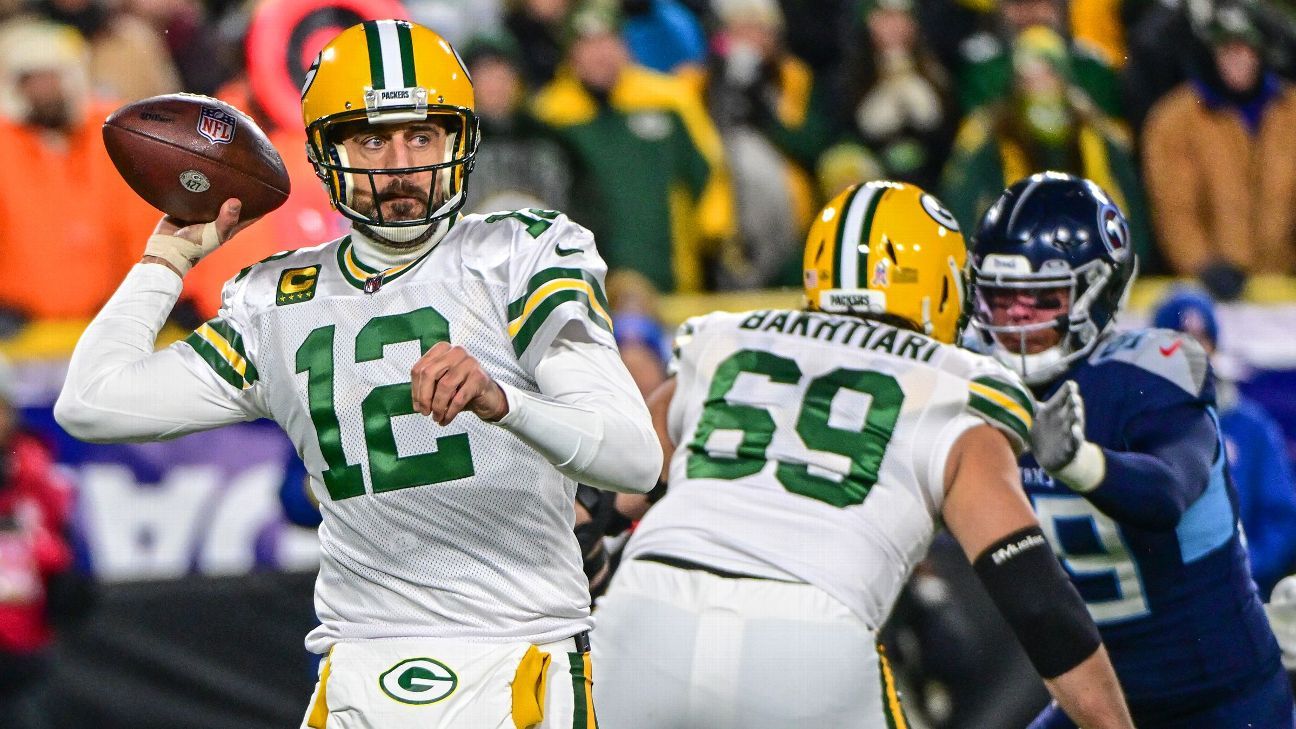 GREEN BAY, Wis. -- Aaron Rodgers used to thrive in these conditions: cold, snowy and under the lights at Lambeau Field. It's when the Green Bay Packers quarterback has done some of his best work.

Instead, Rodgers missed open receivers, took a sack at an inopportune time and rendered last week's season-saving upset of the Dallas Cowboys practically meaningless Thursday night in a 27-17 loss to the Tennessee Titans at Lambeau Field that dropped the Packers to 4-7.

And Rodgers knew it.

"I've got to throw the ball better than I did tonight," Rodgers said after going 24-for-39 for 227 yards and two touchdowns. "Not a lot of margin for error for us and definitely not against a team that gives you some opportunities. We've got to have those plays."

Among the ones Rodgers meant came in the fourth quarter, a play the Packers had to convert in order to mount any type of comeback.

Like on third-and-12 with 9:23 left, when he over-led a wide open Sammy Watkins across the middle, leading to a punt.

And on third-and-3 with 5:32 left, when he sailed a ball over Allen Lazard's head and the Packers turned it over on downs after the next failed pass to Lazard.

And the 12-yard loss on a sack with 2:39 left that all but ended any hope of a turnaround.

After the win over the Cowboys, which snapped a five-game losing streak and seemed to energize the locker room, Rodgers said he "felt like I threw the ball just about exactly where I wanted it."

He couldn't explain why it felt so different on Thursday. Was it the conditions? His injured right thumb?

"I couldn't tell you [or] point to one thing," Rodgers said. "I'm not going to make excuses about my thumb. It's been the same since [he hurt it against the] New York [Giants]. I don't know. I've got to go back and look at it.

"I felt like fundamentally I was in a good spot. I just didn't have the same type of consistent grip and ball coming out the same way. I threw a lot of kind of wobblers tonight. There was some wind. Just missed a few throws I should have had. Definitely the one to Sammy and the one to Allen."

Lazard tried to put some of the onus on himself.

"If he's throwing the ball to me, I'm expecting to catch it," he said.

The Packers have lost consecutive primetime games with Rodgers as the starter after winning 13 straight under the lights. They have another primetime affair next week at the 8-1 Philadelphia Eagles.

Coach Matt LaFleur described Rodgers and some of his receivers as "a little off tonight for sure." As emotional and excited as he was after his team beat the Cowboys on Sunday, he was equally distraught after this one.

"I don't even know what to say," LaFleur said. "It was nothing like a few days ago."

Yet he wasn't willing to write off the season. LaFleur dismissed any thought to turning to young players, such as Jordan Love, and Rodgers offered a reason to think the playoffs were still a possibility.

"If we play up to our potential, we can win our last six games," Rodgers said. "I'm confident in that. Obviously, I've got to play up to my potential. Tonight wasn't it."

That hope perhaps came from the sudden emergence of rookie receiver Christian Watson, who caught two more touchdown passes against the Titans to give him five in the past two games; and the return of Randall Cobb, who caught six passes for a team-high 73 yards.

"I think last week showed us a lot, the possibilities," Rodgers said referring to the Cowboys game. "This week we just didn't play as complementary in all three phases. You've got to be excited about the way Christian's played the last two weeks. Cobby coming back today I think led us in receiving yards. That was a big jolt for us."

At this point, though, the Packers are so far behind the NFC North leading Minnesota Vikings (8-1) that the division seems like a lost cause. A wild-card path to one of the seven NFC playoffs spots might be their only hope, but Thursday's loss dropped them to 11th place in the conference.

"You lose another one and you might as well say we're probably out," Cobb said.

More in this category: « Qatar bans alcohol around World Cup stadiums Messi: Argentina have finally arrived at WC »
back to top