DeChambeau doesn't regret not being vaccinated 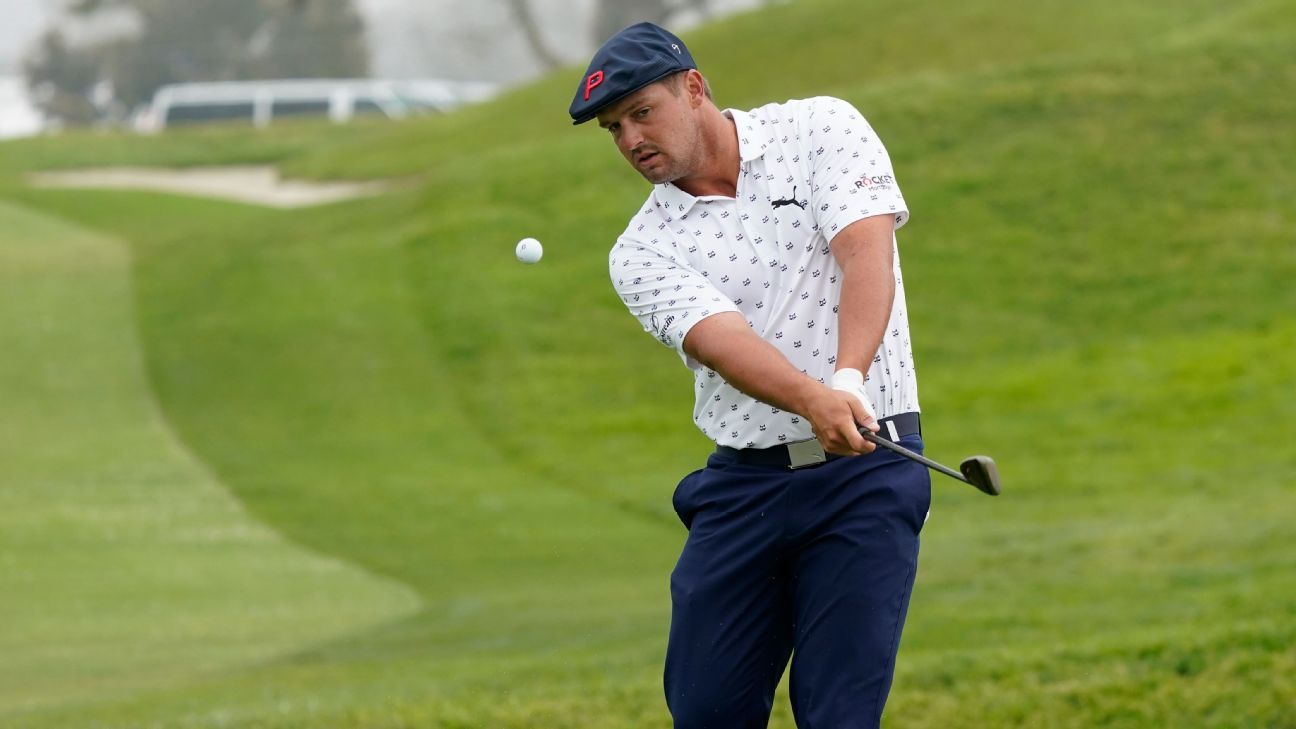 MEMPHIS, Tenn. -- A positive COVID-19 test kept Bryson DeChambeau from competing in the men's Olympic golf tournament and still has him searching to regain energy as he competes in this week's WGC-FedEx St. Jude Invitational.

But DeChambeau, 27, said he does not regret his decision not to get vaccinated for the coronavirus.

"The vaccine doesn't necessarily prevent it from happening," DeChambeau told a few reporters after his nine-hole pro-am round at TPC Southwind on Wednesday. "I'm young enough, I'd rather give it [the vaccine] to people who need it. I don't need it. I'm a healthy, young individual that will continue to work on my health.

"I don't think taking the vaccine away from someone who needs it is a good thing. My dad is a perfect example. He got it [the vaccine] early on because he's a diabetic. People like that need to get it. My mom got it. I don't want to take away that ability."

The Centers for Disease Control and Prevention has said there are no vaccine shortages in the United States.

DeChambeau added: "Now as time goes on, if it [the vaccine] is mainstream, really, really mainstream, then yeah."

The CDC reported this week that more than 90% of the COVID-19 cases in the U.S. -- and more than 95% of hospitalizations and deaths -- are among unvaccinated people.

DeChambeau, as part of Olympic protocols, was required to take three COVID-19 tests on consecutive days, 24 hours apart, and return negative results before being allowed to fly to Tokyo for the tournament.

He said he tested positive on July 23 and said a subsequent test was also taken just in case the first was a false positive.

"They didn't think it was a false positive, they just wanted to be sure," he said. "I didn't feel anything for two days. All of a sudden, started to feel tired. Started getting fully better two or three days ago. For the most part, it's funny, you stay at home and you quarantine for so long, you just feel tired. You're not doing anything."

DeChambeau said he tested negative before traveling to The Open in England, upon arrival at the tournament and again before leaving. He said this is the first time he's tested positive going back more than a year through numerous tests at tournaments and as a requirement for travel.

"It was bound to happen," he said. "Unfortunately, it happened that week. The odds are you get tested enough, you travel around, it's going to happen. I tried to take all the necessary precautions to not contract it, and unfortunately on Friday [July 23] I tested positive. I tested positive a few times [in the aftermath]. You can't do anything about it."

DeChambeau said he regretted missing the Olympics, that he hopes to qualify in 2024 for another opportunity, but he felt detached watching because he was not competing.

"After I tested positive, my brain just shifted," DeChambeau said. "I love it [the Olympics], thought it was amazing. I'd like to be there in three years."

DeChambeau has become known for his fitness regimen that has seen him pack on some 40 pounds while purposely trying to gain weight and muscle mass; he leads the PGA Tour in driving distance.

But he said he's lost "8 to 10 pounds" in the past two weeks and feels his clubhead speed is down. For that reason, he's not putting too much emphasis on results.

Although he wasn't able to practice much while sick, DeChambeau said he went longer periods without touching a club last year during the three-month tournament shutdown due to the pandemic. He was able to swing on a simulator.

"I'm not really expecting much," he said. "I'm just going out and trying to get through a whole week and feel comfortable, and then do it again and get my golf swing in a place where I'm comfortable. So maybe some lower expectations this week."

DeChambeau is playing the first two rounds with Dustin Johnson and Cameron Smith.

More in this category: « AAC commissioner: No plot to poach from Big 12 2021 draft kit: Rankings, cheat sheets, mock drafts, sleepers and analysis »
back to top