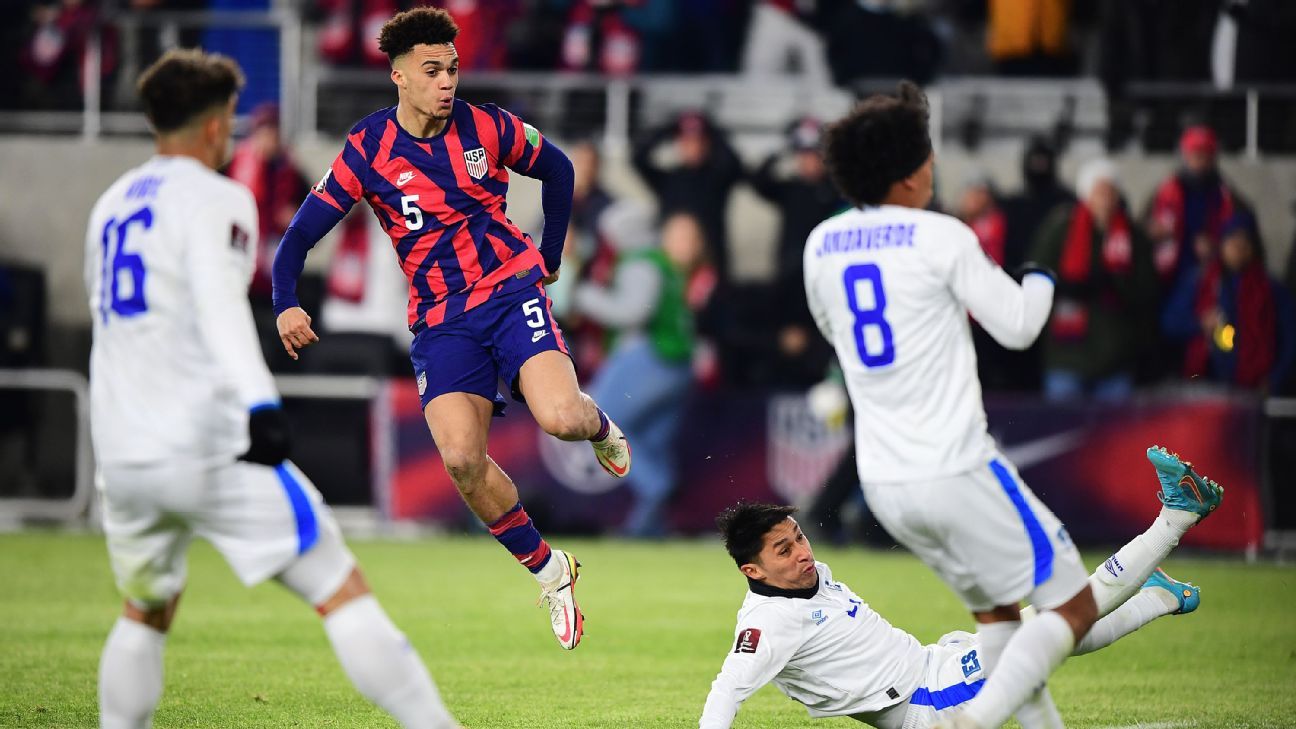 Antonee Robinson celebrated his goal for the United States with an acrobatic backflip, followed by a front spring, and then a feigned leg injury.

A memorable celebration for a player who goes by a galactic moniker.

U.S. fans will nonetheless laud Robinson's athleticism -- and his nickname -- as his effort ensured the 1-0 win for the USMNT over El Salvador in World Cup qualifying on a frigid Thursday night in Columbus, Ohio.

After a scoreless first half, Robinson wasted no time breaking the deadlock early in the second half, pouncing on a loose ball at the back post in the 52nd minute and hammering a low volley past El Salvador goalkeeper Mario Gonzalez.

The narrow victory on a 29-degree night at Lower.com Field boosted the U.S. to 18 points with five games left in the qualifying window. The U.S. is one point behind Canada. Mexico has 17, followed by Panama (14), Costa Rica (12), Jamaica (seven), El Salvador (six) and Honduras (three).

What to make of USMNT's win over El Salvador

The Futbol Americas crew reacts to the USMNT's 1-0 victory vs. El Salvador in the CONCACAF World Cup Qualifiers.

"Really happy to get the win, this one we've been preparing for. It wasn't the prettiest game. And there were times when we played good football, when we just had to kind of take our chances," Robinson said after the match. "One step closer to our goal qualifying for the World Cup."

The U.S. is at Canada on Sunday and hosts Honduras on Wednesday at St. Paul, Minnesota. Qualifying ends in March with trips to Mexico and Costa Rica around a matchup with Panama in Orlando, Florida. The top three CONCACAF nations qualify to Qatar 2022, and the fourth-place team advances to a playoff against the Oceania champion, likely New Zealand.

On a night when the USMNT's offensive prowess from the likes of Christian Pulisic and Weston McKennie fell short, it was England-born Fulham defender Robinson who supplied the goal for the crucial win.

Gregg Berhalter praised Robinson's versatility in his left full-back position that requires him to be a contributor on both the defensive and attacking fronts.

"We call our full-backs the superpower of our team. We do that because they produce, they give assists and goals," Berhalter said. "We put an emphasis on our full-backs arriving in the penalty box because we know we have that midfield line that's supporting them, and can clean up anything that comes out of the box."

Regarding his acrobatic antics to celebrate the goal, Robinson said it is something that comes second nature to him.

"I don't practice backflips anymore. It's just one of them muscle memory things. I've been doing it since I was a kid. So I just know I can do it."

And what about the feigned injury?

Robinson said he was mimicking a Kenyan player he saw while playing for Everton's youth team as a teenager in Africa.

"My friend's been on me for weeks to do that celebration, so I had to pull it out,'' Robinson said. "Didn't tell anyone, so there were a few people scared. It's all part of the fun of enjoying the game.''

The move initially caused concern among his teammates.

"He kind of scared me because I thought he pulled his hammy,'' winger Timothy Weah quipped.

The Americans' 15th straight home win over El Salvador since 1989 didn't come easily. They outshot El Salvador 8-3 in the first half but put none on target. But the offense followed a familiar pattern: The U.S. has scored 11 of its 13 goals during World Cup qualifying in the second half of games.

"I think we could have done that much better. The big picture of this game, we're still in very good position in World Cup qualifying. The three points were vital at home and we achieved that," Berhalter added.

"So happy now it's time to regroup and come up with a plan to attack Canada."

More in this category: « A league without Tom Brady seems like a foreign concept, and it could come soon 49ers: Lance will start at QB 'sooner than later' »
back to top