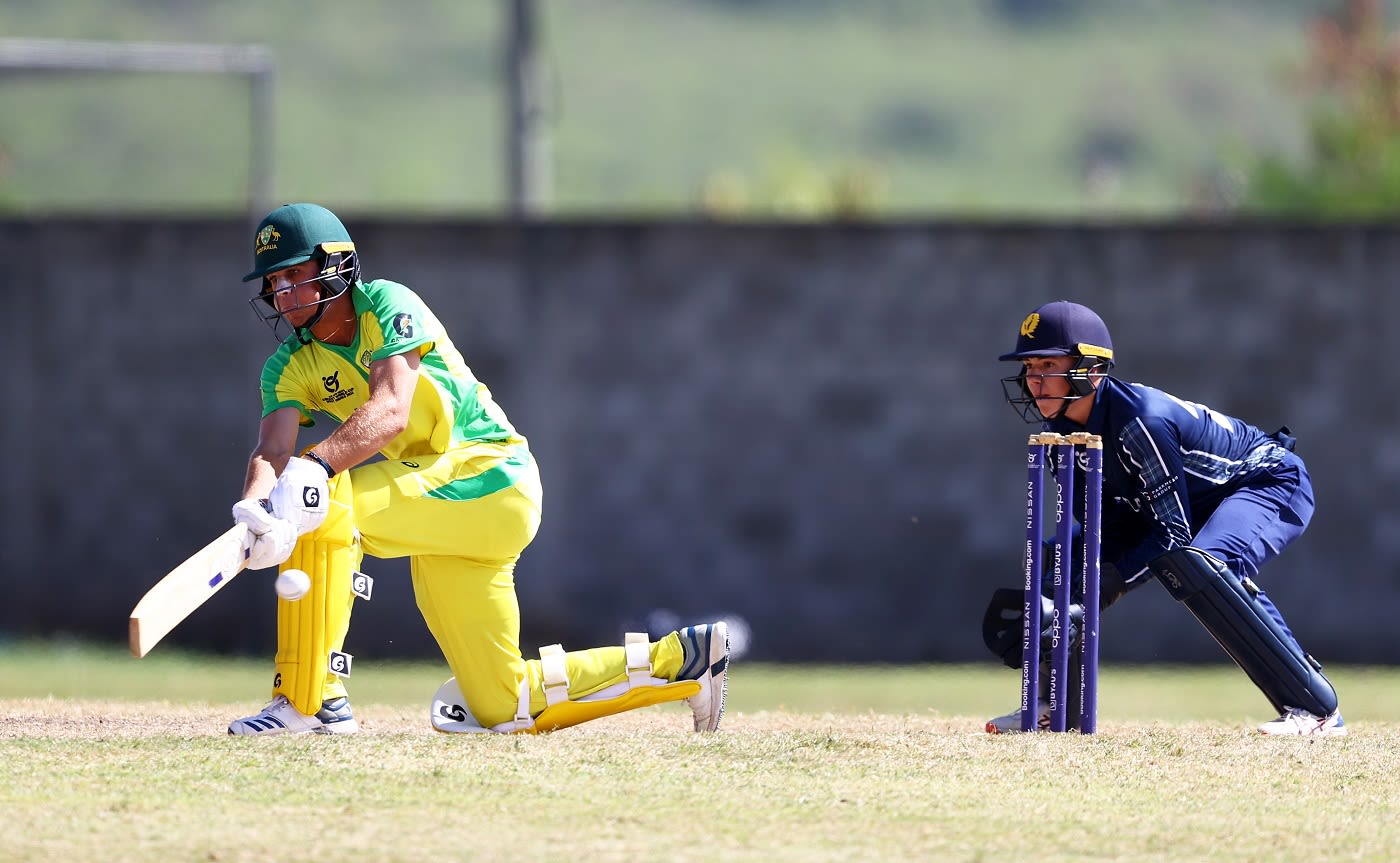 Australia 276 for 7 (Wyllie 71, Miller 64, Kellaway 47, Qasim 3-40) beat Pakistan 157 all out (Mumtaz 29, Salzmann 3-37, Whitney 2-31) by 119 runs
Batter Teague Wyllie continued his domination at the U-19 World Cup before the seamers came to the fore as Australia saw off Pakistan comfortably in the quarter-finals. Australia now face either India or Bangladesh in the semi-final.
After scores of 86* and 101* in the group stage, Wyllie once again dropped anchor to make 71, his ease of handling pace and spin frustrating Pakistan. Wyllie put on a brisk 86-run opening stand with Campbell Kellaway (47) to set the tone of the innings, but a 101 partnership as a follow-up with Corey Miller did not give Pakistan a look in.
They started steadily and gradually upped their scoring rate as the partnership grew. Wyllie first moved to fifty and Miller followed suit, and after 37 overs Pakistan had only one wicket to show.
Medium pacer Awais Ali finally broke through when he bowled Wyllie in the 38th over, but the platform was set for the middle order to go out all guns blazing.
Cooper Connolly, the captain, bashed four fours in a 25-ball 33 even as Miller eventually fell for 64. Then Australia slumped by losing five wickets in eight overs before No. 9 William Salzmann smacked a 14-ball 25 to give the innings a lift towards the end with Australia finishing with 276.
Qasim Akram, the batting allrounder who also bowls offspin, was the pick of the bowlers with his 3 for 40 - including two top-order wickets - but poor returns from the pace bowlers hurt Pakistan. Zeeshan Zameer went for 76 in nine overs, Awais' economy was nearly six and Ahmed Khan could not take a wicket.
Pakistan lost their openers inside the fifth over, even as Abdul Faseeh (28) and Irfan Khan (27) tried to rebuild, but Connolly went to his go-to partnership breaker of the tournament Salzmann and he delivered yet again, removing Irfan with a yorker that rattled his middle stump. Pakistan soon slumped to 83 for 4 when Faseeh followed.
That was the beginning of the end, as it turned out. Qasim was run-out for 9, Abbas Ali and Maaz Sadaqat were dismissed by offspinner Jack Infield, and Pakistan soon folded for 157 to crash out of title contention.
United Arab Emirates 224 for 9 (Aayan 93, Bawa 51, Sankar 3-31) beat West Indies 142 all out (Edward 51*, Parashar 4-30, Giyanani 3-21) by 82 runs
Elsewhere, UAE caused a massive upset by beating hosts West Indies in the playoff matches for positions 9-13. Dhruv Parashar (4 for 30) and Jash Giyanani (3 for 21) combined to suckpunch West Indies for 142, in defence of 225. The margin of victory could've been even bigger if not for Nathan Edward's unbeaten 51.
West Indies slipped to 32 for 4 and from there on, there was no looking back. Edward saved some face for West Indies with his 65-ball 51, before Parashar cleaned up the tail with a further three lower-order wickets and end West Indies' misery in the 40th over.
Earlier in the day, UAE too were in a sticky position in their own batting innings, needing a lower-order recovery to push their score up to 224. They were 76 for 6 on the back of Shiva Sankar's opening burst, but No. 6 Aayan Afzal Khan dug in to score a 121-ball 93. He was supported by No. 8 Shival Bawa's 51, and their 103-run seventh-wicket stand rejuvenated UAE's innings. A few more lower-order contributions set West Indies a challenging target.
Uganda 123 all out (Kakuru 65, Kariko 5-19) beat Papua New Guinea 88 all out (Morea 26, Miyaji 4-29, Baguma 3-30) by 35 runs
In the 13th place playoff semi-final, Uganda earned their first win in the competition as they successfully defended 123 against Papua New Guinea in Diego Martin. Their three frontline bowlers shared all ten PNG wickets to bowl them out for 88 in 19.3 overs.
Juma Miyaji and Joseph Baguma, the off pinner, ran through the PNG top order while Matthew Musinguzi took two lower-order wickets. Miyaji finished with 4 for 29 and Baguma returned figures of 3 for 30 while PNG's Junior Morea (26) was their only batter to cross 20.
PNG's John Kariko took 5 for 19 off his nine overs earlier in the day. While no other batter went past 26 on the day, Uganda's Cyrus Kakuru hammered 11 fours in his 59-ball 65 to take Uganda to 123, which made the difference int he end.
Teague Wyllie
Cooper Connolly
William Salzmann
Dhruv Parashar
Jash Giyanani
Cyrus Kakuru
Pakistan
Australia
Aust U19 vs Pakistan U19
ICC Under-19 World Cup
Read 54 times

More in this category: « Deandra Dottin's career-best 150* in vain as rain washes out first ODI in Johannesburg India win fifth U-19 World Cup title after seamers Raj Bawa, Ravi Kumar prove too hot for England »
back to top