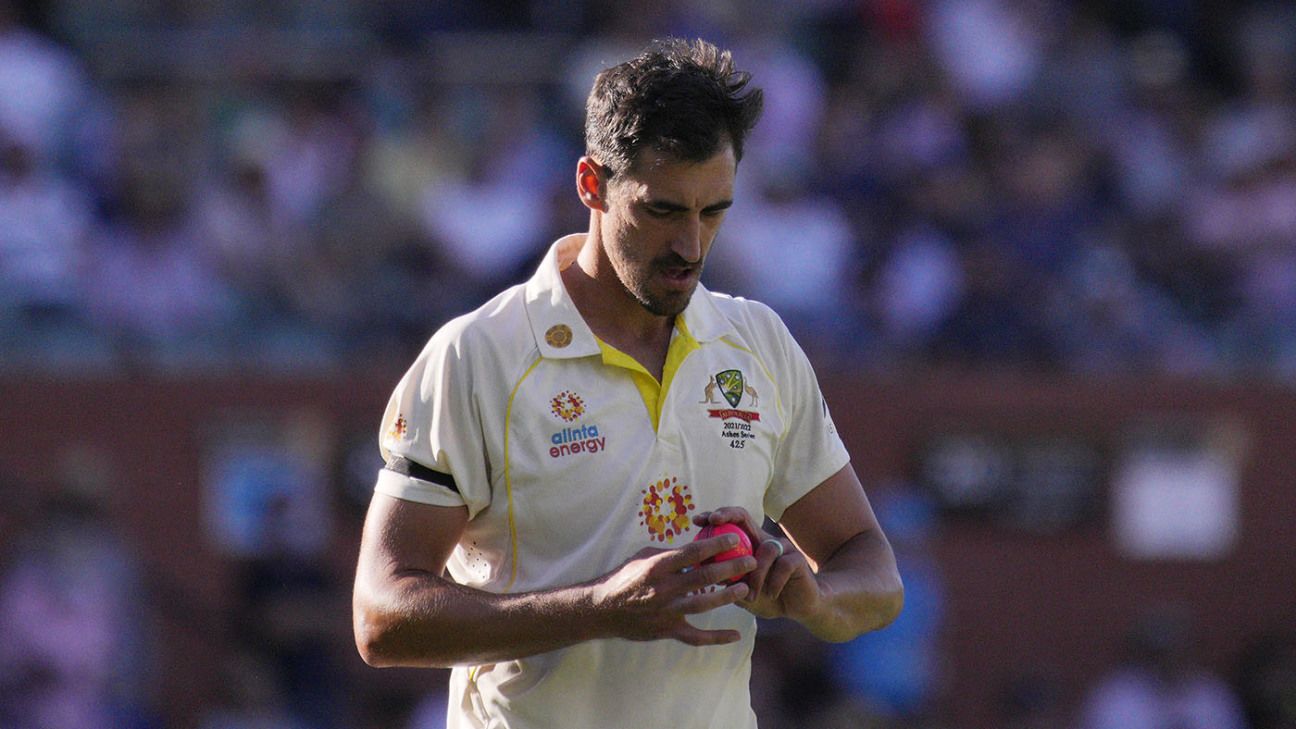 As he was crowned Australia's leading male player, Mitchell Starc admitted there were times over the last couple of years when he did not want to be playing cricket.
Starc was named the Allan Border Medalist on Saturday, finishing one vote ahead of Mitchell Marsh, after a 12-month period that was capped by his leading role in the 4-0 Ashes victory. He was also part of Australia's successful T20 World Cup campaign and the leading performer in their one ODI series against West Indies.
It comes at a time where bio-bubbles continue to place significant strains on players and for Starc followed a 2020-21 season where he played on while his father was gravely ill before he passed away in February.
"The last two years, as life is at the moment, there's a lot of ups and downs," Starc said after claiming the award for the first time. "You find ways to adapt and what not, but it's a reflection of the support base I have had throughout those two years as well.
"There's certainly been times when I haven't played my best cricket or certainly times over those two years where I didn't want to play any cricket. I'm very thankful for my support networks and in particular Alyssa, to play cricket at the highest level [and] be there to support me as well, I can't thank her enough for that."
Starc took 19 wickets in the Ashes, including the memorable dismissal of Rory Burns with the first ball of the series at the Gabba, and in Adelaide took on extra seniority in the absence of Pat Cummins (Covid) and Josh Hazelwood (injury). The first three Tests, which included his part in the electrifying final hour on the second day at the MCG, were among Starc's most consistent performances of his career and he was the only specialist quick to play all five matches.
"It goes back to the work you do behind the scenes, and the work you put in with [strength and conditioning] and time spent with physios and what not," Starc said. "A huge thanks to the support staff, particularly [Australian Men's] physio David Beakley to keep me on the park for five Test matches and keep me on the park for five and let me play five
"Think at times I've certainly bowled better or had better spells than I may have had throughout this summer, but the consistency is the main one for me," he said. "I've always wanted to be better at that. [It was] probably one of my more consistent series so that was a nice little one to acknowledge the work I've done or others have helped me with.
"I'm 32 tomorrow so hopefully I can continue that, don't know how much room for improvement there is, but it's always about the really good stuff and the not so good and closing that gap so hopefully I can continue that."
Starc has been one of the most scrutinised bowlers of the current generation and started the home season with some question marks over his place in the side, although Cummins said that was never a discussion had within the team.
Shane Warne has been among his harshest critics and Starc appeared to reference it when asked during the TV broadcast of the awards about his first-ball dismissal of Burns. "You're running in and trying to hit the stumps I guess. It was a straight half-volley on leg stump, I think someone said."
Asked later about Warne specifically, Starc did not take it further but did acknowledge in broader terms that he had learnt to deal criticism and scrutiny.
"It doesn't interest me at all. He's entitled to his opinion," he said. "I'm going to go about my cricket in the way I'd like to and I've got my family and support networks.
"I went through periods years ago where seeing any criticism or different opinions was almost a bit of a spur for me to stick it up them, but a couple of years ago I made that decision to get away from it all. Think that's helped me stay really level between some really good stuff and not so good stuff and not let it affect me at all."
Starc received his medal while watching wife Alyssa Healy play in the Ashes Test in Canberra. He will shortly start preparations for the T20I series against Sri Lanka in mid-February before the tour of Pakistan in March. At the last minute Starc opted out of the IPL auction so he will then have a break before a mid-year tour of Sri Lanka.
"I was a click of the button away from entering the auction but personally didn't want to spend 22 more weeks in a bubble," he said. "They'll be a time where I'd love to go back to the IPL but in terms of wanting to play as much as I can for Australia that's a decision I've done for a while."
Mitchell Starc
Australia

Andrew McGlashan is a deputy editor at ESPNcricinfo