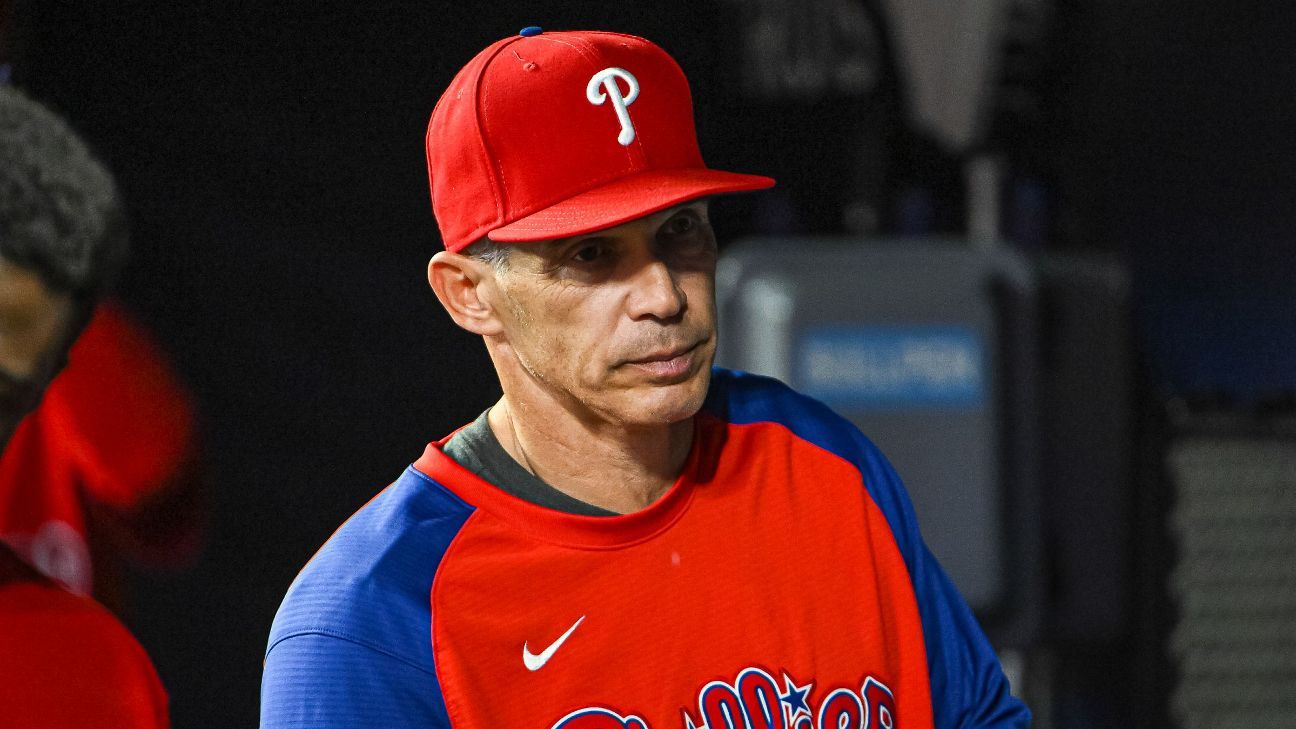 Joe Girardi managed a Philadelphia Phillies team with the reigning National League MVP, five 2021 All-Stars, a payroll above the luxury tax and expectations of ending the NL's longest playoff drought.

But buried deep in the NL East standings and with a sagging bullpen, defensive deficiencies and slumbering starts from some of their high-priced veterans, Girardi paid the price for Philadelphia's poor start. He was fired Friday, becoming the first major league manager to lose his job this season after failing to turn a team with a record payroll into a playoff contender.

The move was made with the Phillies at 22-29, having lost seven of their past nine games and sitting in third place in the National League East, 12 games behind the New York Mets and 5½ games out of the second NL wild-card spot.

"I think we can make the playoffs. I think we're in a position where we can battle back to do that. I do believe that," president of baseball operations Dave Dombrowski said.

After the Phillies' announcement, Girardi made his regular appearance on Sirius XM's MLB Network Radio, saying, "We underperformed and that falls on me. This is what happens." Girardi noted struggles in the bullpen and some slow offensive starts among the "number of reasons we didn't win."

"I think you can overcome, sometimes, one thing, maybe even two, but sometimes when it's more than that, I think it's somewhat difficult," Girardi said. "... I just pray that they, you know, get better and they get to the playoffs."

Girardi, 57, had served as Phillies manager for the past three seasons, going 132-141 as Philadelphia continues to seek its first playoff appearance since 2011. His first year with Philadelphia was the pandemic-shortened 2020 season. The Phillies went 82-80 last year, eight games out of a wild-card bid.

Also dismissed Friday was coaching assistant Bobby Meacham, who had joined the team in 2020 along with Girardi.

Bench coach Rob Thomson will serve as the team's interim manager for the rest of the season, while quality assurance coach Mike Calitri was promoted to bench coach.

The Phillies have a $233 million payroll -- the fourth-highest in the majors, per Spotrac -- and boast 2021 NL MVP Bryce Harper and NL Cy Young Award runner-up Zack Wheeler, Aaron Nola, All-Star catcher J.T. Realmuto and free-agent sluggers Nick Castellanos and Kyle Schwarber. Yet Philadelphia hasn't won the World Series since 2008 and has watched fan interest plummet through a decade-plus of mediocre baseball.

"It's not something that can't be fixed and changed," Dombrowski said. "I think we already started some of those changes this winter time when we made some changes within our system, our organization, a lot of changes, but those things don't show up overnight."

Harper has been plagued most of the season with right forearm soreness and was forced to give up right field and play designated hitter. Second baseman Jean Segura is out for up to three months with a fractured right index finger. The Phillies are 12-15 at home and are 4-10 in one-run games.

Thomson has been with the Phillies since the 2018 season. He previously spent 28 years in the Yankees organization, including 10 seasons when Girardi served as manager from 2008 to 2017.

"As a bench coach you're spending a whole lot of time preparing for the other club and probably not so much time in the clubhouse," Thomson said. "I'm going to take the preparer hat off. I'm still going to prepare some, but I'm going to have my confidence in the coaches around me to keep me informed of information. Now I can go out in the clubhouse and really communicate with the players, get to know them, get the feel, know what they like, know what they don't like, know when they're hurt, know when they're not hurt, so that they know that I've got their back and that I support them."

Thomson's first game Friday will be against a Los Angeles Angels team that has lost eight straight games overall and six straight on the road.

More in this category: « Real or not? Jose Altuve could be MVP again 4 unvaccinated Twins to miss series in Toronto »
back to top