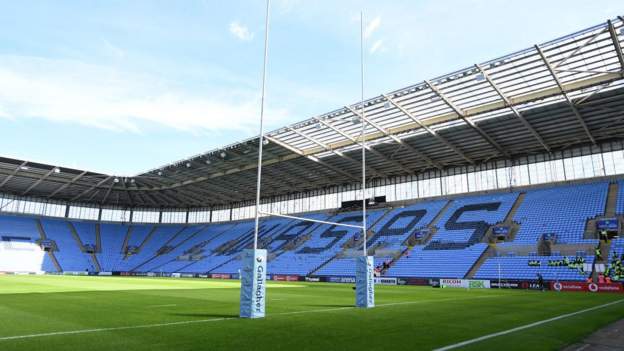 Wasps have filed notice in the High Court that they intend to appoint administrators to "protect the club's interests".

Wasps Holdings Limited, which includes the Premiership club and Arena Coventry Limited, said the move "does not mean the business is in administration".

It said it will provide "a crucial period of grace" as it tries to "secure the long-term future of the group".

The measure was taken amid an "impending threat of action from HMRC".

Wasps said last month they were in talks with His Majesty's Revenue & Customs over an unpaid tax bill.

The Coventry-based club said earlier this month they were close to securing funds to repay some of the £35m in bonds which helped finance their relocation from London in 2014.

They were unable to meet a May deadline and were seeking refinancing options.

The news comes on the same day the Rugby Football Union also warned Worcester Warriors they will be suspended from all competitions unless they provide a "credible" funding plan by Monday, 26 September.

Wasps' CBS Arena is also home to Championship football club Coventry City, who moved back to play there in August 2021.

A statement from Wasps Holdings Limited said negotiations with "a number of interested parties" have been "going on for some time, are in advanced stages and we are hopeful of securing a deal".

"In the meantime, the day-to-day operations of the business are unaffected, and we will continue to support our players, staff, supporters, bond holders and suppliers, and keep them fully updated during what we appreciate will be an unsettling time," it added.

The RFU confirmed it is in dialogue with Wasps, and "will work with them to understand the current action, their sustainability plans and what the next steps will be".

Under RFU rules, if insolvency occurs after the season has started, relegation is the consequence, unless the club succeeds with a 'no-fault' application - effectively demonstrating the financial crisis was not their fault.

The situation is further complicated by the fact relegation from England's top tier has been put on hold in the wake of the coronavirus pandemic.

Wasps, twice European champions in 2004 and 2007, have lost their opening two Premiership matches, away at Gloucester and at home to Bristol.

But a youthful side beat Newcastle in the Premiership Cup on Tuesday.

Six times English champions, including in three successive years from 2003 to 2005, Wasps are scheduled to visit Bath in the Premiership on Friday, 23 September.

Bath said on Wednesday evening that Friday's match "remains unaffected and will go ahead as planned".

Wasps played in west London in their amateur days but have had three homes since rugby union became professional in 1996, initially sharing Loftus Road with Queens Park Rangers for six years.

They first moved to High Wycombe before, in December 2014, relocating to the Ricoh Arena - since rebranded the Coventry Building Society Arena.

The most recent set of accounts for Wasps Holdings, which covered the financial year ending June 2021, showed an £18.5m loss over a two-year period, with liabilities of £54.7m.