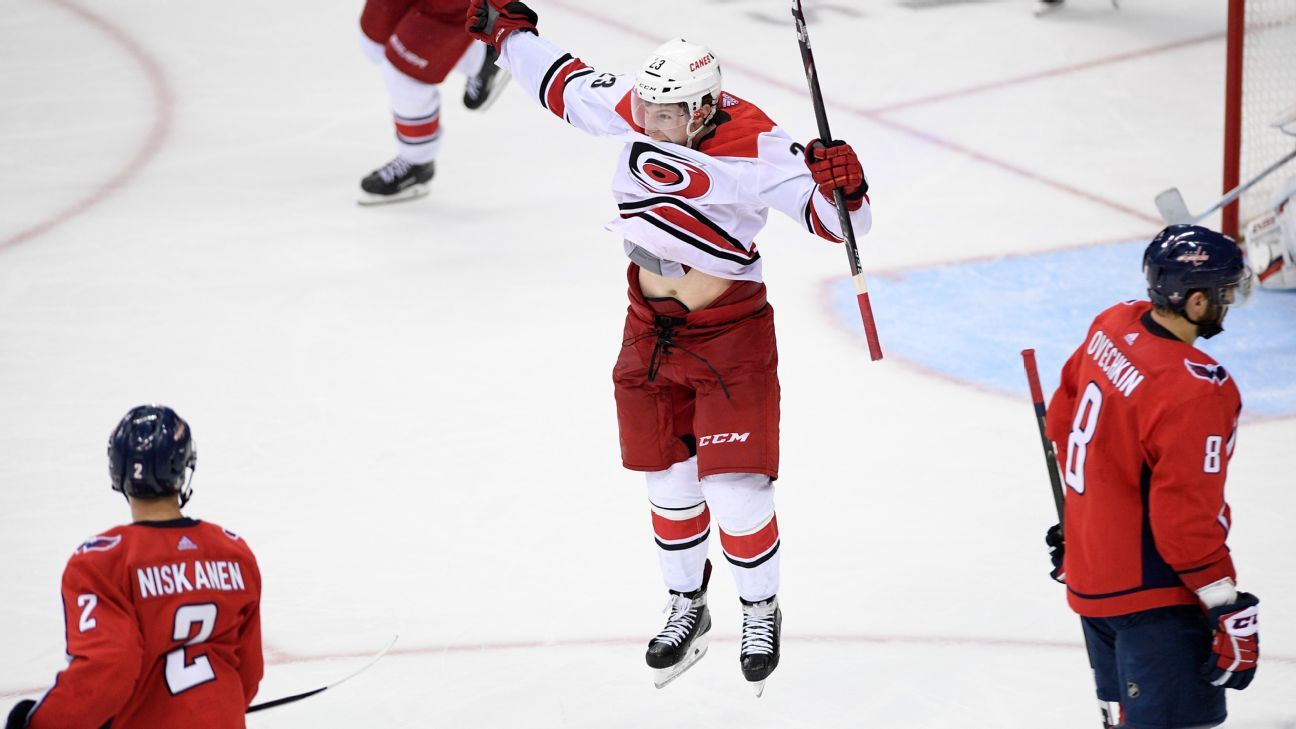 WASHINGTON -- The Capitals never lost to the Carolina Hurricanes in the regular season, and they never faced a series deficit in the team's first-round matchup -- until it was over.

By the time Hurricanes winger Brock McGinn netted the series-clincher in a 4-3 double-overtime victory in Game 7 on Wednesday, the defending Stanley Cup champion Capitals were out of gas and out of answers.

Carolina advanced to the Eastern Conference semifinals on the Caps' home ice, with a win that most people in the building believed the Canes deserved.

For Washington, the deflation was palpable. Speaking barely above a whisper, the Caps' leaders explained in stunned silence what it was like to exit in the first round of the playoffs after holding two separate two-goal leads on home ice and two separate leads in the series.

"It's disappointing," said Alex Ovechkin, who had a series-high nine points but still has never scored a playoff overtime goal. "It's not where we expected to be. But you know, it's a hard-fought series, and they just ended up being in more plays than we did.

"Obviously, I thought the first two periods we dominated. It was a great series. Lots of toughness, lots of hard plays over there. Two teams fighting to win, and in overtime, you see it's not a pretty goal. The stick hit the whatever, and it goes in. We controlled the game [at first]. But if you get a lead, you have to play kind of careful. It doesn't matter who scored."

Alex Ovechkin expresses his frustration and disappointment with the Capitals' Game 7 double-overtime loss to the Hurricanes.

"They kept coming the whole time," Holtby said. "They play a consistent style of hard work, and in the end, that's what beat us. You gotta give credit where credit's due. On paper, you wouldn't expect them to be the team that they are. That's credit to them and their coaching. They play a team game, and that's why the series was so close.

"It was obviously there to take, but ... we just weren't good enough. I gotta come up with more saves in order to win a series, and that's pretty much the bottom line."

Canes first-year head coach Rod Brindamour kept his shifts short, and it resulted in a team that appeared to have more energy than the Capitals in the two extra periods. Caps center Nicklas Backstrom wasn't going to use it as an excuse.

"I think both teams were [gassed]. Players played a lot of minutes," he said. "It's the same thing for everyone."

The series had quite a few turning points. Between Ovechkin getting into a fight for the first time in a decade, T.J. Oshie suffering an injury that knocked him out of the series and a controversial call that would have ended Game 6 and allowed the Caps to advance, there were a host of reasons the defending champs came up short.

But in Wednesday's matchup, Sebastian Aho's short-handed goal in the second period, which came after the Caps led 2-0, was clearly the boost the Canes needed to keep life.

Evgeny Kuznetsov put Washington up 3-1 a few minutes later, but Carolina went on to score the game's last three goals.

"Looking back at that, we need to find a way to shut them down there. Especially when you've got a 3-1 lead. But we gave it to them," Backstrom said.

Backstrom also bemoaned a lost opportunity in the second overtime, when the Capitals failed to produce a single chance during a power play.

"That's another scenario we need to do a better job there," he said. "I mean, at least get a shot on net."

The Capitals were outshot and outhit, and they drew two fewer penalties while winning more faceoffs. Without Oshie and with defenseman Michal Kempny having been ruled out before the series, they were undermanned and ultimately outworked. Coming off the most exciting season in the history of the franchise, the letdown was obvious.

"When the season is over, you understand that. You fight through 82 games, then Game 7, they score one goal, and it's the kind of situation where you're disappointed," Ovechkin said. "It's frustrating."

The Hurricanes finished behind the Metropolitan division champion Capitals in the regular season, but everyone in the Washington locker room acknowledged that Carolina deserved to move on in this year's run to the Stanley Cup.

"They thrive off hard work, and they kept coming the same way that they've played," Holtby said. "Got to give them credit. They earned it."

More in this category: « McLellan agrees to multiyear deal to coach Kings Lightning's Kucherov, out since Sept., scores twice »
back to top