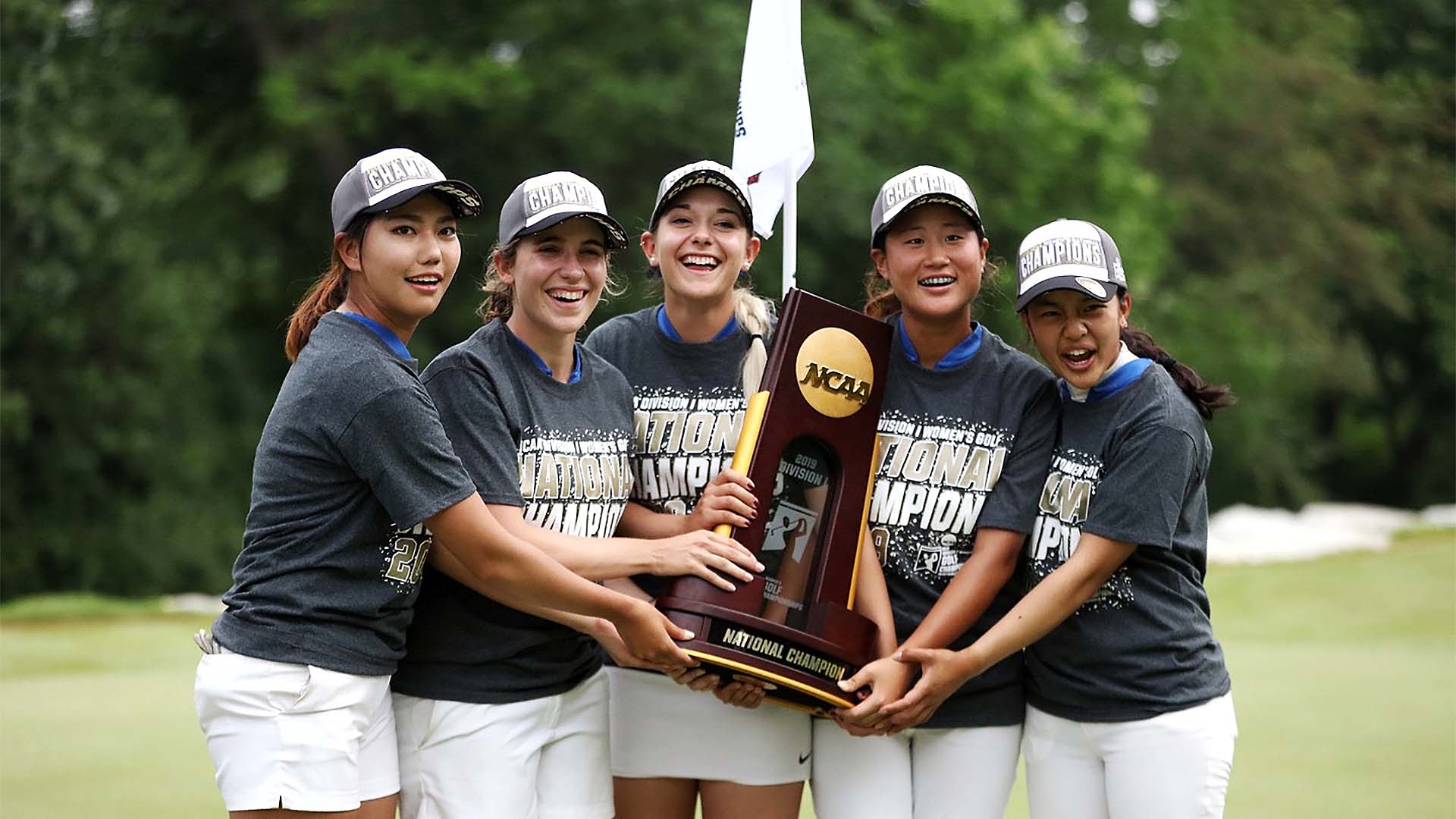 FAYETTEVILLE, Ark. – Trailing in four of five matches on the back nine, Duke knew there was plenty of time in what became the longest day of the NCAA Women's Golf Championship.

Duke sent three of those matches to extra holes, won two of them and walked away with a seventh NCAA title.

Miranda Wang won the decisive match on the 20th hole when Letizia Bagnoli of Wake Forest tried to hit a fade around a tree with a fairway metal and pulled it into a creek. A final hour of nail-biting moments ended when Bagnoli quietly reached down to pick up Wang's ball and concede the par.

''All of us know this course, you need a lot of patience,'' Wang said. ''We've been through a lot. We know things turn around.''

They turned in Duke's favor, denying Wake Forest its first NCAA title and Jennifer Kupcho a storybook ending to her decorated career.

Kupcho, who won the NCAA individual title last year and the inaugural Augusta National Women's Amateur last month, had never trailed in any of her three matches until Duke sophomore Jaravee Boonchant made a 12-foot birdie on the 17th hole for her first lead of the match.

Boonchant nearly threw it away with a clunker of an approach that led to bogey on the 18th to go to overtime. But on the first hole, Kupcho pulled her tee shot into a hazard, hacked out and Boonchant didn't let her escape by making par to win in 19 holes.

''We've been working hard all year and it paid off,'' Boonchant said.

In the other match that went extra holes, Siyun Liu of Wake Forest made birdie to give the Demon Deacons their second match.

It was the first time three matches went extra holes in the championship round since the NCAA switched to this format in 2015. Making the final day even longer was a six-hour rain delay Tuesday at Blessings Golf Club that forced the semifinals and championship match to be played Wednesday.

Duke outlasted defending champion Arizona in the semifinal, with freshman Gina Kim delivering the winning point with a fairway bunker shot to 2 feet. Wake Forest had no trouble against Auburn, winning four of the matches and tying the other.

Wake appeared to be on its way, leading in four matches, though all of them were tight enough to turn quickly.

Ana Belac went out first and put the first point on the board for Duke with a 5-and-3 win over Vanessa Knecht. Emilia Migliaccio, who won all three of her matches for Wake Forest, hit her approach to 2 feet for birdie for a 1-up victory over Kim to keep a fourth match from going extra holes.

It all came down to Wang, who broke into an early celebration on the 18th hole when her 10-foot birdie putt for the win caught the left edge of the cup and spun out. Both players were in the fairway on the par-5 second hole, with Bagnoli blocked slightly by a tree. Her teammates lining the left side of the fairway watched it go long and left and into the creek. Wang went just right of the green with her second and Bagnoli was short of options.

She eventually took a drop, playing short of the green and her pitch over bunkers for par settled 3 feet away. Wang chipped some 20 feet beyond the hole and lagged it to 2 feet. The par was conceded and the celebration was on.

''We wanted to be on this stage,'' Wake Forest coach Kim Lewellen said. ''It was an outstanding match. They came out on top, but I'm proud of these young ladies. We've got two freshmen and a junior. We've got another chance at it.''

It won't include Kupcho, who was in tears. She earned an LPGA card late last year and deferred it until after college. Kupcho, along with NCAA champion Maria Fassi of Arkansas, make their pro debuts next week in the U.S. Women's Open.