Rob Baxter: Exeter director of rugby confident of no coronavirus outbreaks at clubs 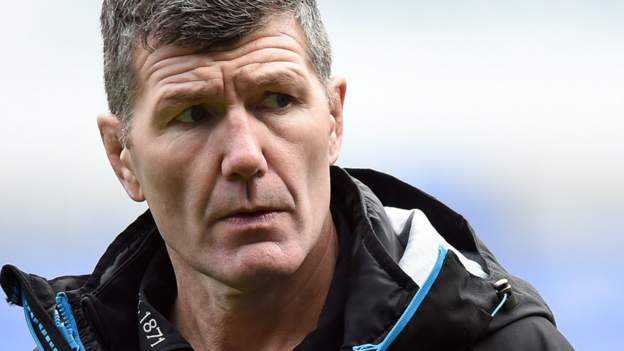 Exeter director of rugby Rob Baxter is confident there will not be an outbreak of Covid-19 among Premiership clubs once the top-flight season restarts.

Fixtures have been suspended since early March because of the coronavirus pandemic and will resume on Friday, with games played behind closed doors.

The Premiership leaders will face Leicester Tigers on Saturday.

"You've got to look at the actual percentage of it in the population at the moment," he said.

The subject was brought into focus after six players from rugby league side Hull FC tested positive for Covid-19 earlier this week.

Hull owner Adam Pearson told BBC Radio Humberside on Wednesday that one potential source of infection at his club could have come from an unnamed player having to take his sick child to hospital.

The player is reported to have been sent home from training after displaying symptoms of coronavirus.

Five of the players who tested positive featured in Sunday's Super League match against Salford Red Devils and the two clubs' scheduled fixtures this weekend have been postponed.

Exeter have erected a marquee in front of the main entrance to Sandy Park for their opponents to change in, while the hosts use extra dressing room space inside the stadium in order to observe social distancing protocols before and after matches.

Baxter confirmed that no Exeter players or staff have tested positive for coronavirus, although one player who has a vulnerable family member has had to take extra precautions.

"We're all pretty much training and existing in kind of our own bubbles where really the only people inside, and even in distance contact with each other, are tested as negative," added Baxter.

"I think it's very simple for us, we're doing everything we can to make sure the people we're going to be in contact with on a rugby field don't have it.

"I don't think there's much more we can do, I think it's almost physically impossible to do much more than we're doing.

"One thing that has been proven is that although in rugby clubs over this last eight-to-10-week testing period there has been the odd case, there hasn't been an outbreak at any club despite being in phase two training.

"That should give us all a lot of confidence that we're not going to have mass outbreaks."