Sachin Tendulkar: 'Waqar's bouncer and playing through pain defined me' 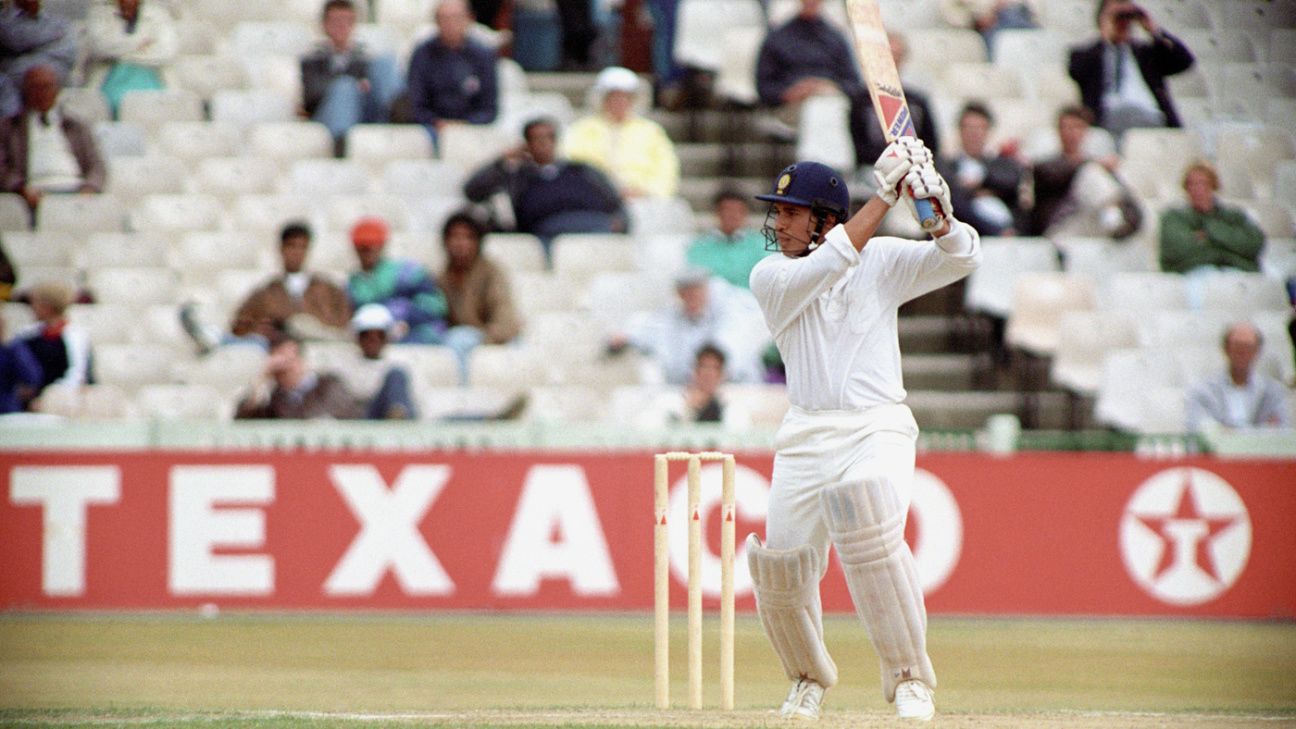 Sachin Tendulkar scored the first of his 100 international centuries as a teenager not yet a year old in international cricket, hitting 119 not out in the fourth innings at Old Trafford to help India save a Test. On the eve of the 30th anniversary of that innings - which came on August 14, 1990 - Tendulkar recalled how his first series against Pakistan and his training under Ramakant Achrekar before that had helped negotiate the England bowlers.

"I scored that 100 on August 14 and next day was our Independence Day, so it was special," Tendulkar told Press Trust of India. "That hundred at least kept the series alive till next Test at the Oval. The art of saving a Test match was a new experience for me."

Famously batting on despite wearing a Waqar Younis bouncer on his nose during his debut series, Tendulkar harked back to that experience as one that helped him deal with facing Devon Malcolm and company at Old Trafford a few months later, including getting hit on the back of the head by a Malcolm lifter in the first innings of that match.

"In Sialkot where I got hit and scored 57, we saved that Test match, too, from 38 for 4," Tendulkar said. "Waqar's bouncer and playing through pain defined me. After those kind of hits you are either stronger or you are nowhere to be seen.

"Devon and Waqar, during that phase, were easily the two quickest bowlers in the world bowling at 90 mph. Yes, I didn't call the physio as I didn't want to show them that I am in pain. My pain threshold was fairly high. It's okay to get hit. So what? You don't show your pain to the bowler."

"Yes, I didn't call the physio as I didn't want to show them that I am in pain. My pain threshold was fairly high. It's okay to get hit. So what? You don't show your pain to the bowler." SACHIN TENDULKAR

When he played under childhood coach Achrekar, he had already learned to deal with pain because pitches were often used for 25 days straight at the Shivaji Park Gymkhana.

"I was used to getting hit on my body from my days in Shivaji Park as Achrekar sir would make us play on that and it would have enormous wear and tear," Tendulkar recalled. "The same pitch we played a match on one day and next day we were back for nets. So balls would just jump off [a] length and hit my nose. In fact, (during fielding practice) I would just throw the ball up and take it on my body to absorb the pain."

At Old Trafford, Tendulkar walked in with India 109 for 4, which later became 183 for 6, having been set a sizeable 408 for victory. Then Manoj Prabhakar joined him for an unbroken seventh-wicket stand of 160 runs which took India to safety and kept the series alive after India lost the first Test.

Tendulkar elaborated on the challenges of facing the England attack.

"Chris Lewis bowled sharp inswing and throughout my career, backfoot cover drive had been my favourite shot," he said. "The bowler who was the best by far in that series was Angus Fraser. He had a beautiful late outswing, high-arm action, so ball would bounce and move so late that you had to play at it.

"It was a case of showing patience and credit to Manoj that we had a 160-run stand," he added. "No way till the last over [did we think we were safe in the match]. We came together when we were six down but me and Manoj together said 'yeh hum kar sakte hain, match bacha lenge' (we can save the match)."

Among the memories Tendulkar had from the game are the hilarity following his man-of-the-match award and a gift from team-mate Sanjay Manjrekar.

"Well I was 17 and the man of the match was presented with a bottle of champagne. Neither did I drink and also I hadn't reached the legal age for drinking," Tendulkar said. "My senior teammates would tell me 'what would you do with it'. Sanjay Manjrekar presented me a white shirt which was a gift for scoring a hundred. I was really touched."