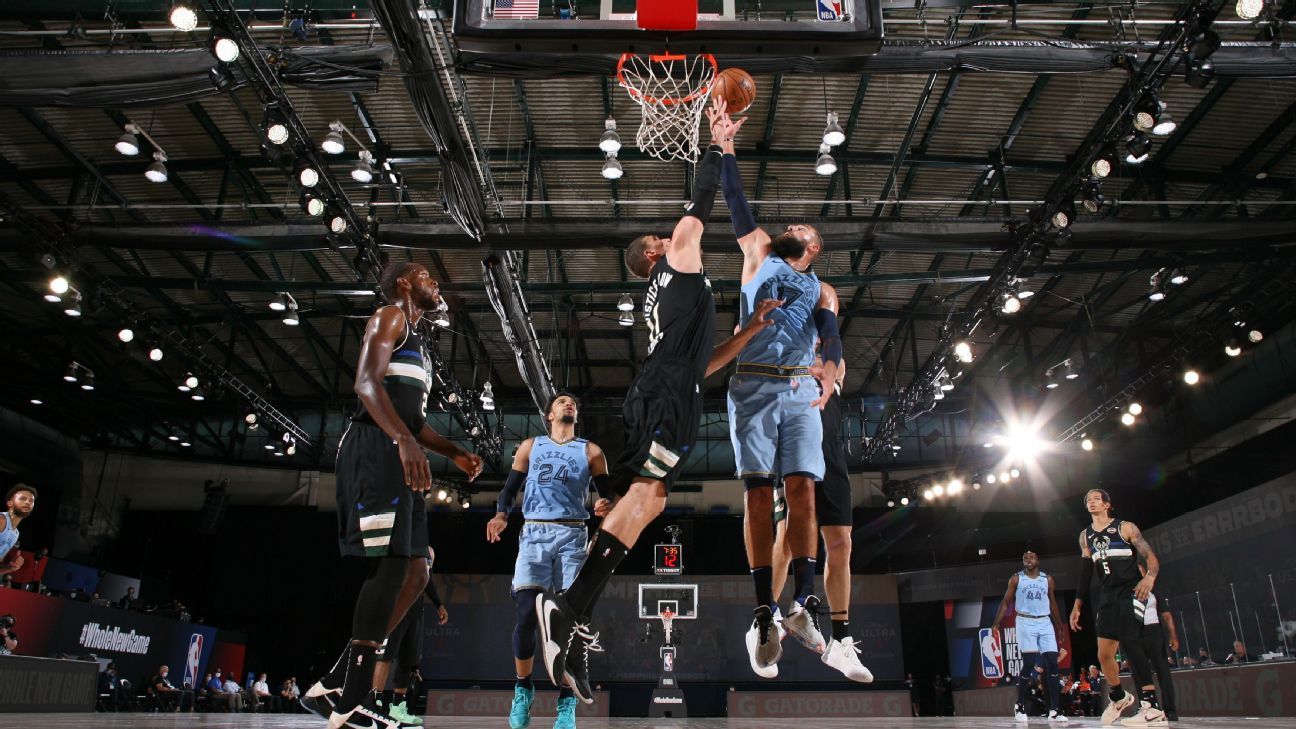 LAKE BUENA VISTA, Fla. -- The Memphis Grizzlies had a simple goal Thursday afternoon: Do not be forced to depart the Walt Disney World Resort.

The Grizzlies, who had put themselves in jeopardy of an early exit by losing six of their first seven games in the NBA bubble, became the first team to clinch a spot in the league's first play-in tournament with a 119-106 win over the Milwaukee Bucks.

"I'm happy that we responded," said Grizzlies center Jonas Valanciunas, who was awarded the game ball after recording his first career triple-double with 26 points, 19 rebounds and 12 assists. "We showed the character. We're not going home. We're going to fight until the last second."

The win guaranteed the Grizzlies one of the two spots in the league's first-ever play-in tournament, which will tip off Saturday at 2:30 p.m. ET on ABC. The Grizzlies' play-in opponent will be either the Phoenix Suns, who routed the Dallas Mavericks on Thursday afternoon, or the Portland Trail Blazers, who play in one of the last games of the day, against the Brooklyn Nets at 9 p.m. ET.

In the play-in, the eighth seed has two chances to win one game and claim the West's final playoff spot and the right to face the Los Angeles Lakers in the first round. The ninth seed would have to win two consecutive games to claim the bid.

It's been a roller-coaster ride in the bubble for Memphis. The Grizzlies lost their first two games in brutal fashion -- an overtime loss to the Blazers (which looms awfully large now) and a two-point loss to the San Antonio Spurs thanks to a pair of DeMar DeRozan free throws with a second remaining -- and then saw star big man Jaren Jackson Jr. suffer a season-ending injury to the meniscus in his left knee in the team's third game, a loss to the New Orleans Pelicans.

The Grizzlies, who were already without backup point guard Tyus Jones (knee), have struggled without Jackson and needed every bit of the 3½-game advantage they had on the five teams behind them in the Western Conference standings that entered the bubble.

"We were projected to be, what, 27th?" Memphis rookie point guard Ja Morant said after his 12-point, 13-rebound, 10-assist performance, referring to preseason projections for what was expected to be a rebuilding season for the Grizzlies. "Now look at us. Being that underdog doesn't matter to us at all. We love being the underdog. It's just extra motivation, fuel to the fire. It just makes our success that much better."

Portland passed Memphis when the Grizzlies lost Tuesday to the Boston Celtics and Damian Lillard scored 61 points to lead the Blazers past the Mavericks. That left the Grizzlies in ninth for the first time since arriving in Florida, but still left them in control of their own destiny with a win against the Bucks.

"I just wanted to really win this game so we could get to the next part of our mission," said shooting guard Dillon Brooks, who led the Grizzlies with 31 points on 12-of-18 shooting.

The league-leading Bucks were without Giannis Antetokounmpo, who was suspended after head-butting Wizards forward Moritz Wagner in their game Tuesday, as well as Wesley Matthews and George Hill. Milwaukee played its remaining regulars -- Khris Middleton, Eric Bledsoe, Pat Connaughton and Brook Lopez -- each about 20 minutes, but otherwise left the game in the hands of the players at the end of the bench.

Memphis coach Taylor Jenkins was on Mike Budenholzer's staff in Milwaukee last season, and coached with him on the Atlanta Hawks for the prior five seasons, before being hired by the Grizzlies.

"Certainly you'd have to, I don't know, have your head in the sand really deep to not understand everything that was at stake today," Budenholzer said. "Taylor and his group have done such a great job this year, and they earned it. They played well today, they were sharp, guys really stepped up, and so on kind of a relationship or friendship level, I'm very happy for Taylor, very happy for his group."

The Grizzlies slowly took control of the game as it wore on, increasing a one-point advantage after the first quarter to 10 points after two and 19 points after three.

Still, Jenkins took no chances in the fourth quarter -- particularly after several teams have seen massive leads slip away in rapid fashion late in games recently, including the Miami Heat on this very same court Wednesday night. Jenkins returned his starters -- including Morant, the presumptive Rookie of the Year -- to the game with eight minutes to go and the Grizzlies leading by 19 points, removing them only with a few minutes left in the game and with the game still well in hand.

"We waited until the last of the seeding games to play our best game," Jenkins said. "I'm so proud of them. They recognized the moment, the opportunity coming into today, kind of controlling our own fate. I thought they came out with the appropriate focus, the appropriate edge on both ends."

Morant and Valanciunas became the 12th combination of teammates to register a triple-double in the same game, according to research by ESPN Stats & Information, and the first Grizzlies duo to do so. It was a particularly surprising stat line for Valanciunas, considering that the eight-year veteran big man's previous career high was five assists.

"They made some shots," Valanciunas deadpanned when asked to explain how he managed to accumulate a dozen dimes. "No, we played together. It's fun to play that way. It's fun to share the ball. It's fun to see your teammates making shots, having fun playing basketball. That was the biggest key for us today. We had fun."

More in this category: « Source: Jets ship Lee to Chiefs after GM shake-up Sources: Some at Barca open to selling Messi »