Rangers raise Lundqvist's No. 30: 'This is home' 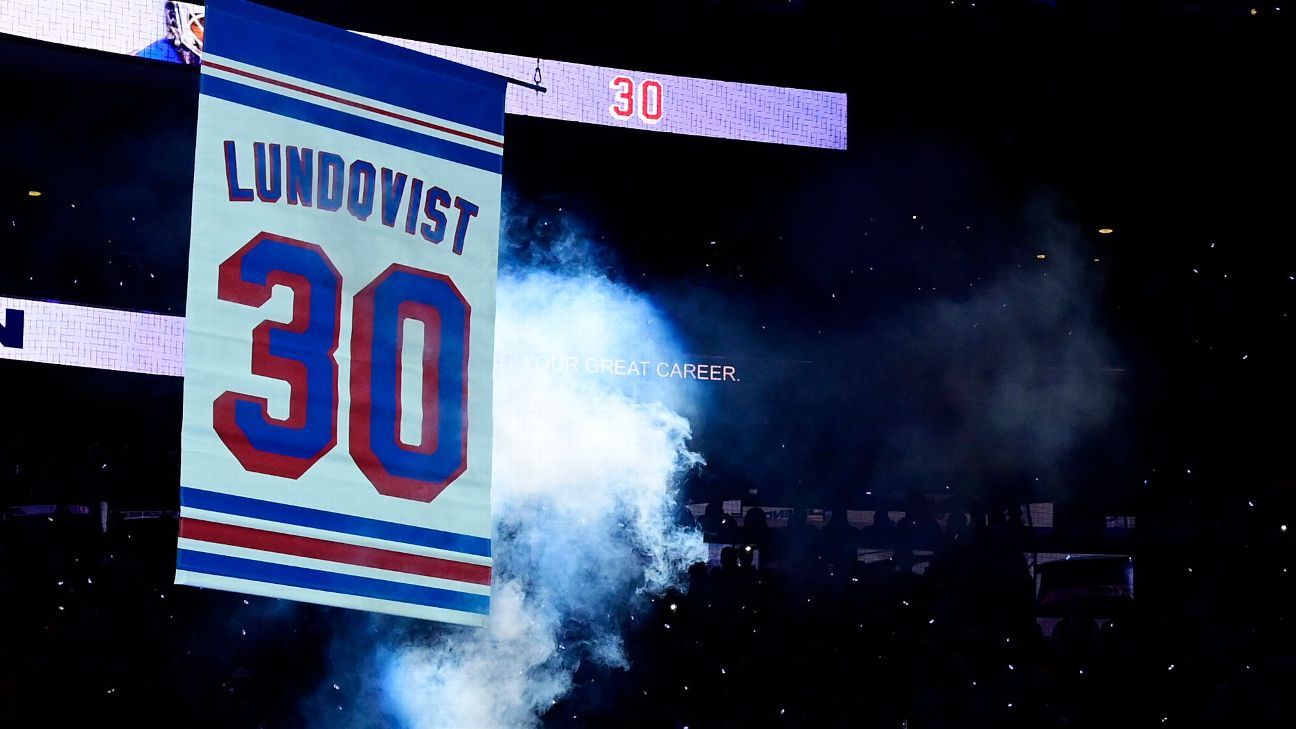 New York Rangers legend Henrik Lundqvist had his No. 30 raised to the rafters in Madison Square Garden on Friday night, with a raucous crowd on hand to honor "The King."

"I'm so happy I get an opportunity to say thank you to all the amazing fans in here that have supported me throughout my career," Lundqvist told the crowd during the ceremony. "It's been an amazing experience and it has given me so much joy. When I reflect on my time in New York, I keep coming back to one feeling, and that's gratitude."

Lundqvist's number is the 11th retired by the Rangers.

Among the special guests in attendance were Lundqvist's family, as well as former NHL players Mark Messier, Adam Graves, Brian Leetch and Mike Richter, all of whom have had their numbers retired by the team. Lundqvist's No. 30 was highlighted on a lighted display on the ice, as well as on the backs of current Rangers players as they prepared for their game against the Minnesota Wild.

Rangers fans made the ceremony even more memorable, chanting "Hen-rik," shouting out lines during his speech and booing owner James Dolan's name when Lundqvist mentioned it.

"I missed you guys," said Lundqvist, who played his last game in the NHL with the Rangers in August 2020.

Lundqvist was given a few gifts during the ceremony. Tennis legend John McEnroe, who is Lundqvist's friend, gave the goalie a new guitar made in Sweden, hand-painted by Lundqvist's mask artist Dave Gunnarsson. Lundqvist was given the game pucks from all 64 regular-season shutouts and 10 postseason puckouts. The current Rangers team presented Lundqvist with three special bottles of wine. Messier and other Rangers legends gave Lundqvist, known as a style icon in the NHL, a Louis Vuitton steamer trunk.

Lundqvist is the all-time leader in franchise history in games played (887), wins (459) and save percentage (.918). He won the Vezina Trophy in 2012 as the NHL's top goaltender. He holds the record for most wins by a European-born goaltender in the NHL. Internationally, he led Sweden to Olympic men's hockey gold in the 2006 Winter Games in Turin.

At a news conference earlier in the day, Lundqvist recalled arriving with the Rangers in the 2005-06 season.

"When I came here, I didn't know what to expect," he said. "I was going to play hockey. I was going to live my dream. Thinking back now, I didn't know how many times I had to pinch myself because I lived my dream here. To live in a place where people care so much. Where they treat you so well. To play in Madison Square Garden. To live in New York City."

Glen Sather, the general manager who drafted him to the Rangers, acknowledged Lundqvist's talent and called him one of the most aesthetically pleasing players in hockey during his 15-year career.

"I used to say: 'If you look well, you play well,'" Sather said at the news conference, glancing at Lundqvist, who was dressed impeccably as always. "Well, there you go. It sort of explains everything."

General manager Chris Drury said that when fans or media ask him what a Ranger is, his thoughts go to Lundqvist.

"Knowing Hank and playing with Hank, he's given me the easiest answer [to that question]," Drury said. "You want to be like Hank. His desire, determination, will to win. His dedication to his craft, along with his talent and skill level. His commitment to this community and this city. He is, for me, the gold standard for what a New York Ranger is, and what a New York Ranger should be for this generation of player. I don't think the organization could ever thank him enough for being that gold standard."

At the news conference, Lundqvist said that during his career he'd speak with Rangers legends who would tell him that his number would be retired by the team one day.

"I would just laugh. It's too hard to imagine. But when they said it was going to happen this year, my first reaction was that I can't wait to come back here and thank everyone," Lundqvist said, fighting back tears. "A lot of people were asking me, leading up to this night, if I was going to cry. And I said, 'If I cry, then I cry.' I just want to be in the moment and feel as much as I can feel."

Lundqvist played all 887 games of his career with the New York Rangers. In 2020-21, when the Rangers went with a younger goaltending duo, he signed a contract with the Washington Capitals but never played a game with them because he needed aortic valve replacement surgery, which ultimately ended his career at 39.

"To me, it was only one team," Lundqvist said. "You don't know that when you start a career. This is home. I felt that early, within a year or so. When my time was done here, I struggled so much, because I couldn't see myself playing anywhere else. But I still loved the game, so I went for it.

"But in the end, you know, the heart said no. I look back on it and kind of laugh. All along, this was the place. And I'm really proud to have played my entire career in New York City."

More in this category: « Caps lament blown chances in first-round exit Viewers guide to Flyers-Hurricanes on ABC, ESPN+ »
back to top