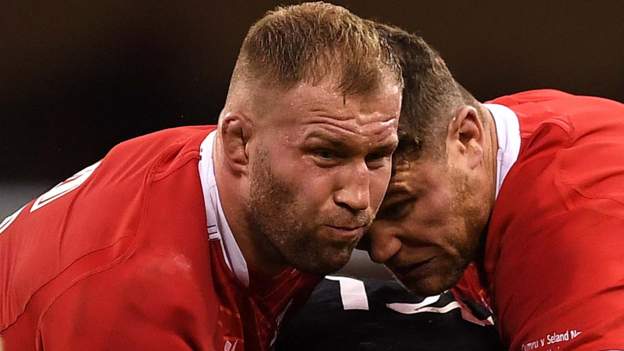 Wales back row Ross Moriarty says he is backing himself to be ready for the Six Nations opening match against Ireland.

On Friday, Moriarty played his first game since injuring a shoulder in Wales' defeat by New Zealand in October.

Ahead of Wales' trip to Dublin on 5 February, the 27-year-old impressed in Dragons' 13-13 draw against Benetton with a try-scoring performance.

"I am always going to back myself," said Moriarty.

"I will mark myself on training next week and push everybody as hard as I can."

Moriarty was the Dragons' most impressive performer as he captained the side in the United Rugby Championship match and proved he offers a physical edge other current Wales options do not.

"The game was very stop-start so I could not really mark myself on that too much," he added.

"I feel fine, my body's fine and that's all that counts. I have missed it a lot and it was nice to be back on the pitch.

"It was nice to get a game in and come through unscathed. It's good to get the tackles and carries needed so I am grateful to get on the pitch and get off in one piece."

Moriarty would win his 50th Wales cap if he is selected next weekend as he battles for a back-row place with Aaron Wainwright, Taine Basham, Ellis Jenkins, James Ratti and Jac Morgan.

"I should have had it [50th cap] two years ago, but I have been injured a lot," added Moriarty.

"It's been a long time coming but hopefully next week I can get on the pitch. The Six Nations is a special time and especially with fans back as well.

"The first game out in Ireland is going to be a big one and I am sure all the boys are looking forward to it."

Dragons director of rugby Dean Ryan praised his returning captain as he highlighted his contribution.

"You can see the difference a player like Ross can make, after not playing for three months he was the man-of-the-match," added Ryan.

"I spoke to Wayne [Pivac] and that was the limit that we could get out of him without putting him under pressure.

"I know Wayne has decisions to make for next week and we want Ross to have the best chance.

"I'd love to have kept him on because he was one person that could have changed the game."

While Moriarty is on Wales duty, Dragons have a two-week break from matches before resuming a season in which they only managed one win in 11 games.

"It was disappointing not to get the win at the end," added Moriarty.

"We are in a tough place at the moment and we have to pull through and stick together, come into training in a few weeks, try and be positive and push forward.

"We need to get a win. It's tough to explain what it's like at the moment."

Hopes that Dragons hooker Elliot Dee had of an initial return to the Wales squad look doomed after he was sent off in the final moments for a shoulder to the head of a Benetton opponent while trying to clear out a ruck.

Dee, who later apologised on social media for the incident, was initially left out by Pivac because of an ankle injury, but had returned against Benetton as a replacement.