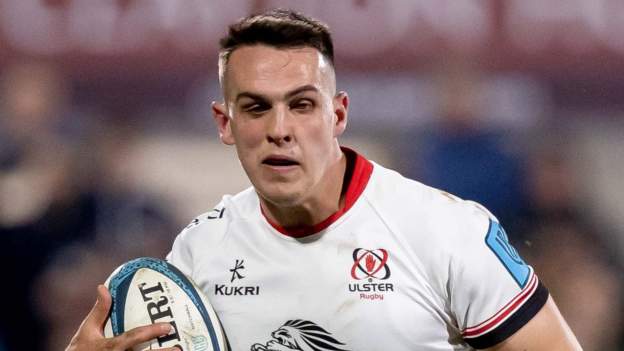 Ulster centre James Hume says trying to earn a starting berth in Ireland's summer Tests against New Zealand is a big motivating factor for him as he prepares to face the Bulls on Saturday.

Hume's inclusion is one of 11 changes to the Irish province's starting line-up from that which controversially lost 23-20 to the Stormers last weekend.

"That's a massive focus for me," said Hume of starting for Ireland in July.

"It was good to get a bit of game time in the Six Nations but I wanted more."

He added: "I want to carry my form into this back end of the season and put them in a position where they have to pick me."

Hume returns to a much-changed Ulster line-up to face the Bulls, forming the centre partnership with Luke Marshall, while Ian Madigan and Nathan Doak are recalled at half-back.

Iain Henderson returns to captain the side after missing the Stormers game and will be partnered in the second row by fellow Ireland international Kieran Treadwell.

Andrew Warwick starts at loose-head prop with Brad Roberts and Marty Moore also in the front row, while Ben Moxham and Ethan McIlroy are named on the wings.

Treadwell, Mike Lowry, Marty Moore and Duane Vermeulen are the only players to keep their starting place from the Stormers defeat as coach Dan McFarland continues to rotate before next week's European Champions Cup round of 16 game against Toulouse.

Hume was introduced as a second-half replacement in Ireland's Six Nations wins over Wales and Italy in Dublin but still finds himself behind established centres Garry Ringrose, Bundee Aki and Robbie Henshaw in the pecking order.

"I came out of it thinking I could have given it a bit more," added the Ulster centre, who made his Ireland bow in last year's 71-10 victory over the USA in July.

"We go into the end of the season now with Ulster, including two massive European games, so that's going to be a good opportunity to put myself forward for the summer tour."

'It will be chaotic at times'

Hume reveals that Ulster have pinpointed some weak points in the Bulls' armour as they seek to avoid losing two United Rugby Championship games in a row.

"Any team that has come to South Africa this season has had a tough time," he said.

"We know what the plan is this week, we know where they are weak and it's our job to exploit that.

"We're prepared for another massive game and we understand it will be chaotic at times but we'll concentrate on ourselves and play our game."

More in this category: « Quins miss out on play-offs after Lang's late penalty falls short Premier 15s final: Focus on England-qualified players to increase in future seasons »
back to top