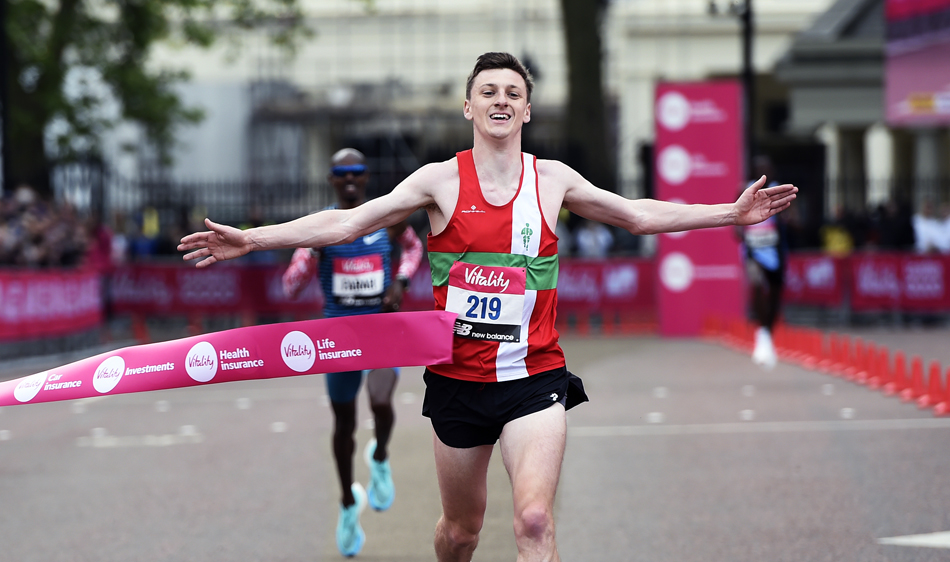 As a mere club runner keen to run the Vitality London 10,000 on Monday, Ellis Cross had to pay his own entry fee of £37. Leaving home at 6am, he travelled to the start on a train. His dream goal was to finish “somewhere near the top five”. Such was his disinterest in his actual time, he didn’t even wear a watch.

After 28 minutes and 40 seconds of racing, though, he emerged as the winner in extraordinary style. Mo Farah, the 10-time global track champion, could not match Cross’s pace in the final 100 metres and finished runner-up in 28:44. The £37 entry fee proved a good investment as he travelled home with a £2000 winner’s prize and the priceless feat of defeating an Olympic legend.

Clearly stunned, Cross was all smiles as he produced the run of his life. In turn, a sportsmanlike Farah was magnanimous in defeat and gave credit to what he called “a determined, deserving winner”.

The two athletes admitted to barely knowing each other before Monday but they share a number of similarities. Both studied at St Mary’s University in Twickenham. Cross works at Up & Running in Surbiton whereas Farah also worked part-time in the Sweatshop running store at the turn of the millennium. Cross even finished fifth in the 10,000m at the European Under-23 Championships in Bydgoszcz in 2017, whereas Farah won silver behind Chris Thompson in the same championships at, coincidentally, the same Polish venue in 2003.

There the similarities end, though. While Farah has established himself as a global running superstar with a stack of major championship victories from 2010 to 2017, Cross has led a relatively anonymous existence. As a junior he won the English National cross-country under-20 title twice in 2016 and 2017 but since then he has clocked a mere 5000m PB of 13:50.56 and 10km on the roads of only 29:53.

Cross was also a talented football striker on the books of Notts Forest as a youngster but gave it up in his early teens to pursue athletics.

At his best Farah would have come close to lapping Cross at 5000m and would certainly have done so over 10,000m. But on Monday it was a different matter as Farah, now aged 39, could not keep pace when Cross accelerated from the front coming into the finishing straight outside Buckingham Palace on a sunny early summer morning.

Mo Farah to the fore at the start of the Vitality London 10,000 (Mark Shearman)

“I tried to make it quite hard from about 2km out as he’s renowned for his strong finish,” said Cross, who was prominent throughout as the entire 6.2 miles as the pack gradually whittled down to a two-man race in the closing stages, “so I tried to get rid of that (Farah’s sprint finish) a bit. I tried to take the inside lane at the end and managed to hold on, so I’m absolutely delighted.”

Farah’s trademark tactics on the track are to get the lead in the closing stages and then hold his rivals off by surging if they tried to challenge him. But Cross, who is coached by Mick Woods, used this same strategy against him on Monday.

Behind, both men beat a good line-up that included five men who have been selected to run the marathon at various major championships this summer. Mo Aadan was four seconds behind Farah in third in 28:48, then Chris Thompson fourth in 29:10, Phil Sesemann fifth in 29:19, Hugo Milner sixth in 29:20 and Andrew Heyes in seventh in 29:26.

On his surreal experience, Cross added: “I got turned down for an elite entry and had to sleep in my own bed last night and got up at 6am to get the train in. I don’t have my name on my number either so during the race everyone was calling Mo’s name and no one knew who I was.”

He added: “I was thinking if I could get near the top five it would be an unbelievable run. I wasn’t bothered about the time. I just wanted to run hard. I didn’t even wear a watch.”

Cross had however prepared for the event by training in Font Romeu, but Farah has recently returned from a stint of altitude training in Ethiopia and was keen to lay down an early summer marker.

Farah said: “I wanted to test myself and see where I was. I would have loved to have come out here and win but Ellis did really well and deserved it.”

When asked when the last time time he was beaten by a club runner, Farah smiled: “It must have been 20 years at least. It’s been a while. But fair credit to him. He was very determined. Some athletes kind of look at you but he didn’t fear anyone. I think that’s a good attitude to have.”

Was it a shock? “It’s not a shock because it is where I am,” Farah reflected. “If I was in top shape and didn’t have any time out, it would be a shock. But the reality is, this is where I am. You go backwards and go: what do I need to change in my training? What do I need to get in more? For me personally, I look at the race and I couldn’t change gears. I just didn’t have that.”

Farah is due to race again at the Great Manchester Run over 10km on May 22. After this he is set to play in SoccerAid on June 12 but his remaining summer racing plans are unclear. At one point in his post-race interviews he admitted his days of racing on the track are over. But he also said “the European and Commonwealths has potential but when it comes to the World Champs I’ve been there and won it and at the moment I have a lot of work to do in order to be competitive”.

He added: “I’m just taking one race at a time. From today it looks like there’s a lot more work to be done.”

Why is he so keen to carry on training and racing? “I just love it!” he said.

Yet one thing is for sure, Farah won’t race the Night of the 10,000m PBs on May 14 at Highgate in north London. Cross, however, is keen to race and now hopes he will get into the A race.

More in this category: « Brigid Kosgei powers to women’s win in London Hodgkinson and Muir one-two in Oslo 800m »
back to top