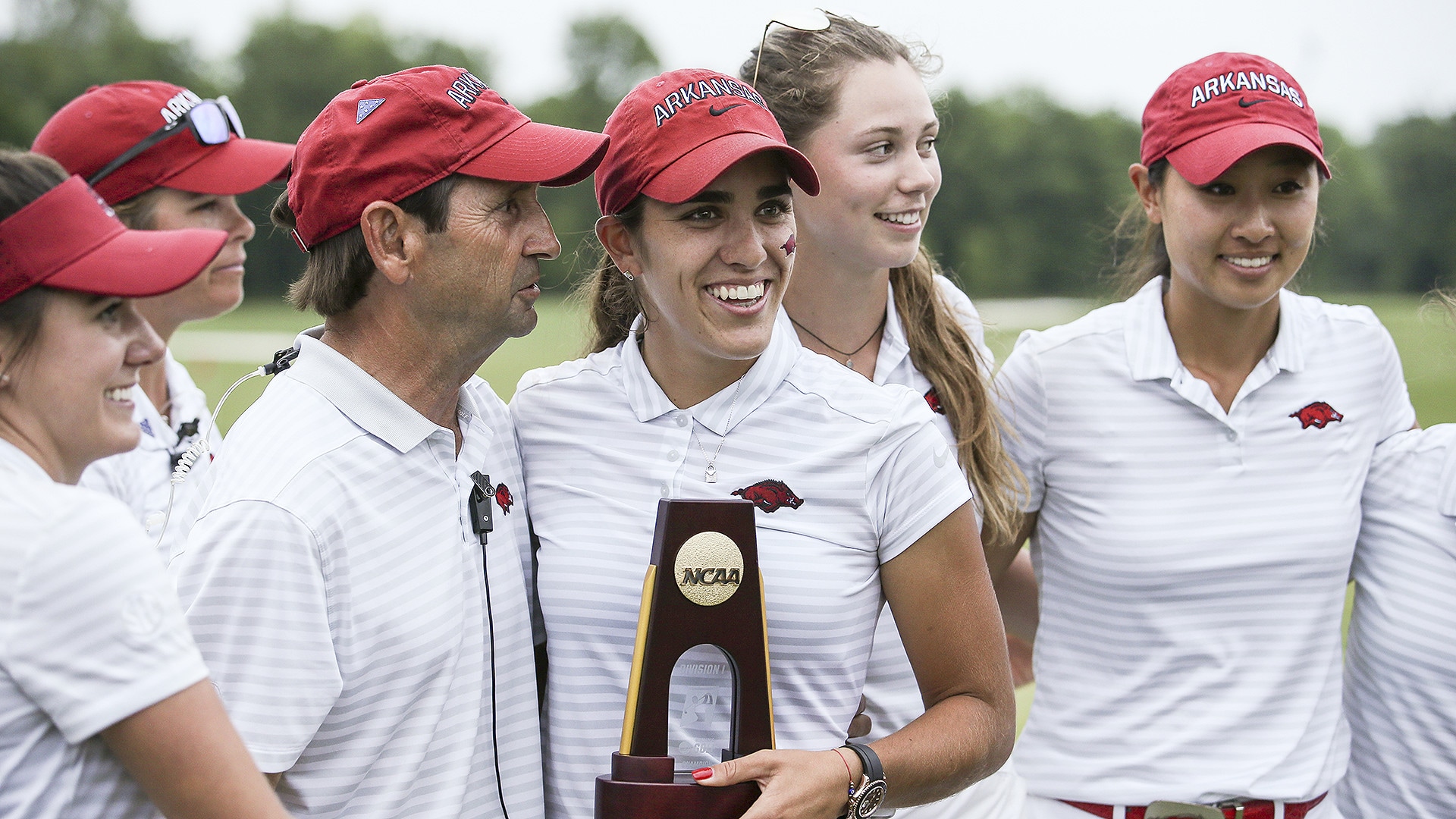 FAYETTEVILLE, Ark. – Ever since April 2017, when Blessings Golf Club was first announced as the host venue for the 2019 NCAA Division I Golf Championships, Maria Fassi had dreamed of moments like this.

The visons, too many to count, showed the Arkansas senior and her head coach, Shauna Estes-Taylor, walking down the 18th fairway at the Razorbacks’ home course, in front of hundreds of Arkansas fans, holding hands, about to put the finishing touches on a national championship.

On Monday, that dream finally became a reality.

“I’ve seen it in my head I don’t know how many times,” said Fassi, who closed in 5-under 68 to run away with the NCAA individual title.

“… It was just way better than what I had dreamed.”

Added Estes-Taylor, who had those same dreams: “It was way cooler in person.”

Fassi finished 54 holes at 8 under, four shots clear of runner-up Sierra Brooks of Florida, and looked at ease around a familiar Blessings track that frustrated most of college golf’s best from the start. Just four players ended up under par.

“This golf course played as tough as I've seen it in a very long time, maybe ever,” Estes-Taylor said.

But Fassi wasn’t deterred. She entered the final round one shot back of Brooks, who played in the morning wave and got in the clubhouse at 4 under. By that time, Fassi had birdied the par-4 sixth, her second of the day, to take the lead.

She made three more birdies and not a single bogey, delivering the knockout punch with a birdie on the par-4 16th hole after hitting a tree with her drive and then wedging to 5 feet.

“She's just fantastic under these conditions,” Estes-Taylor said. “… She thrives when the spotlight is on.”

Fassi’s journey to NCAA glory began when she arrived from Pachuca, Mexico, three years ago after graduating high school early. She was an All-American honorable mention as a freshman despite playing just half a season. Two years later, she won the Annika Award as women’s college golf’s top player. Yet, until Monday, an NCAA title had eluded her.

Fassi still remembers the ride home from last year’s nationals at Karsten Creek, where she entered the week as the favorite before exiting with a 66th-place finish.

“I know I didn't want to feel that way again,” Fassi said.

A year later, she was in tears of elation as she embraced Estes-Taylor after holing out on the 18th green and before being congratulated by her teammates, friends and her mom, Fabiana. Fassi’s dad, brothers and more family called her shortly after from Argentina to offer more congratulations.

This is why the 21-year-old Fassi wanted one more shot. This is why she deferred her LPGA membership until this summer. (Monday’s victory earned Fassi sponsor exemptions into the Marathon LPGA Classic and Walmart NW Arkansas Championship, and last week she earned an invite to the Evian Championship. She also qualified for the U.S. Women’s Open earlier this month.)

She wanted to experience this. Putting off turning pro not only kept Fassi’s NCAA hopes alive, but it also gave her the opportunity to play in the inaugural Augusta National Women’s Amateur, where she captured the hearts of America before finishing runner-up to Wake Forest’s Jennifer Kupcho in an epic final-round battle.

But what happened Monday was bigger.

“This means way more,” Fassi said. “… It's just winning at home, because this is home to me, I mean, it doesn't get any better. This is my last tournament as a Razorback, and I think it's a pretty nice goodbye for me to go out that way.”

Only it’s not goodbye – at least not yet. Fassi’s encore will begin Tuesday in a quarterfinal bout with Wake Forest. And with that, another dream – an NCAA team title – will start coming into focus.