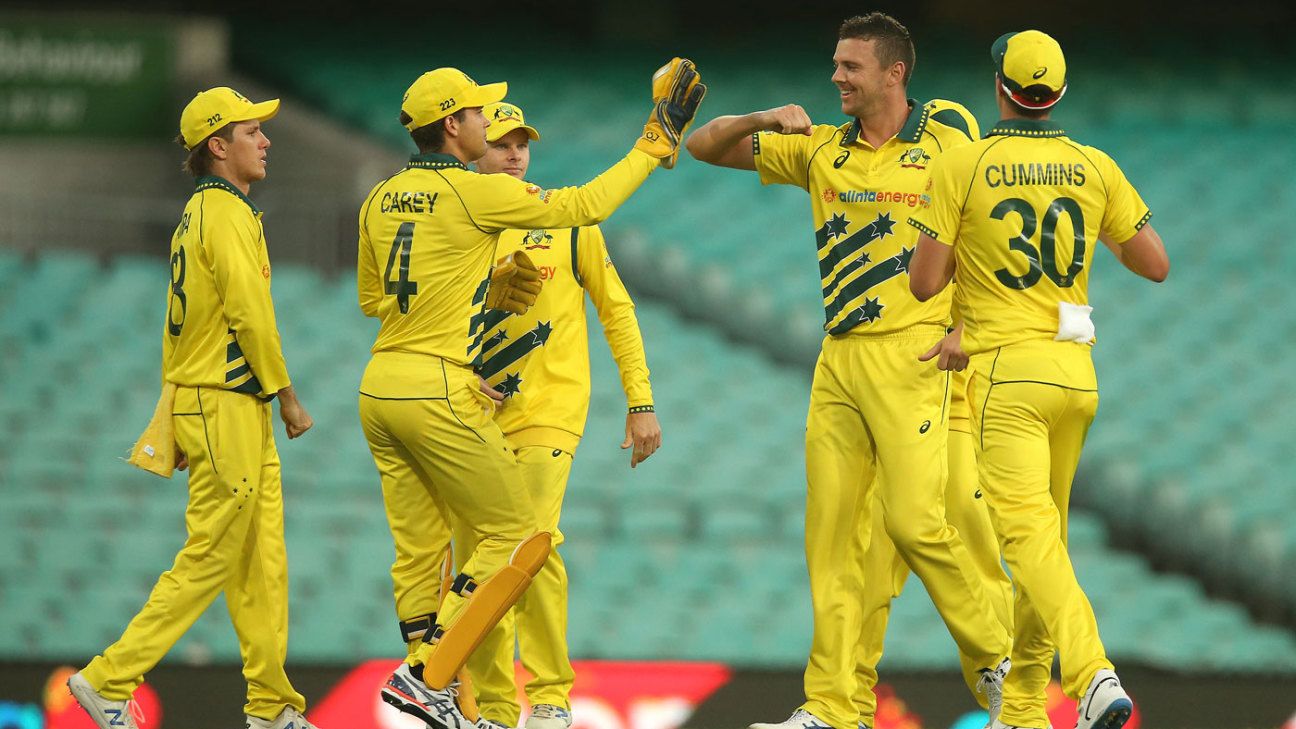 Riley Meredith, Josh Philippe and Daniel Sams are among 21 members of the Australian squad to venture to England for a limited-overs tour of ODIs and T20I matches in September, the national team's first assignment since the onset of the Covid-19 pandemic.

The outsized squad will enable the team led by Aaron Finch and coached by Justin Langer to play internal practice matches on English soil in Derby after entering the biosecure bubble in which they will face Eoin Morgan's World Cup-holding ODI team in three matches at Old Trafford in Manchester after an initial three T20Is at the Ageas Bowl in Hampshire.

Marcus Stoinis and Glenn Maxwell are both back into ODI calculations after time out of the side since last year's World Cup, while the senior assistant coach Andrew McDonald will not join the tour party due to his pre-existing contract as part of the support staff for Rajasthan Royals in the IPL.

After Cricket Australia experimented with an array of leadership combinations over the past two years, a more traditional set-up has been restored with Pat Cummins as the sole deputy to Finch, meaning a demotion of sorts for the wicketkeeper Alex Carey.

"It's a squad with great depth and a sprinkle of some exceptional young players," the selection chairman Trevor Hohns said. "After taking advice and reviewing the leadership of the squad we have decided to revert back to the traditional captain and one vice-captain set-up.

"Alex remains a genuine leader within the squad and will continue to provide valuable support to Aaron as skipper. Pat is very much in the same category and someone the entire squad has immense respect for as a person and a player. This is not a reflection of succession planning, but rather a decision to return to the traditional leadership set-up that has served Australian cricket so well for generations.

"We now have quite an established and experienced senior playing group who all play an important role in the leadership of the team on and off the field. As has always been the case all senior players have a strong voice in all aspects of planning, preparation and playing."

In McDonald's absence, CA have made the intriguing call to include Trent Woodhill, recently appointed as a consultant to the Big Bash League, as a member of the team support staff for the tour, alongside the seasoned pace-bowling coach Troy Cooley and the selector on duty George Bailey.

"We are very pleased with the final group which was chosen with a view to continuing our recent form in T20 cricket and the longer term goal of returning to the top in the 50 over game," Hohns said. "The top and middle order is extremely strong, there's plenty of accomplished all-rounders, fantastic fast bowling depth and spin options.

"The squad also has the cover required to meet all contingencies given replacements are not available for this tour if injury or illness were to occur. The NSP believes this squad, along with those who missed out and others who perform well in domestic cricket, offers a solid platform for success in the white ball game going forward."

The team will assemble in Perth before their departure to England on August 23 where they will initially be based at Derby. Three T20 and one 50-over practice matches will follow, before they face England in matches in Hampshire and Manchester, taking advantage of the on-site hotels at both venues.

Upon their return home from the tour, members of the Australian squad will quarantine and practice in Perth for two weeks ahead of the home international summer - arrangements for this are still being finalised with the Western Australia state government - and those in the IPL will fly directly to the UAE after the ODI series.

"It's vital for cricket that we do everything we can to keep the game going in these tough times," Langer said. "I am delighted with how the players have returned to their states from the break back in March. The whole squad has come back fitter and stronger, which is great testament to each of them.

"We have a massive assignment ahead with World Cups, Test Series against India and South Africa and the Ashes next year. We can't wait to get back into it again."