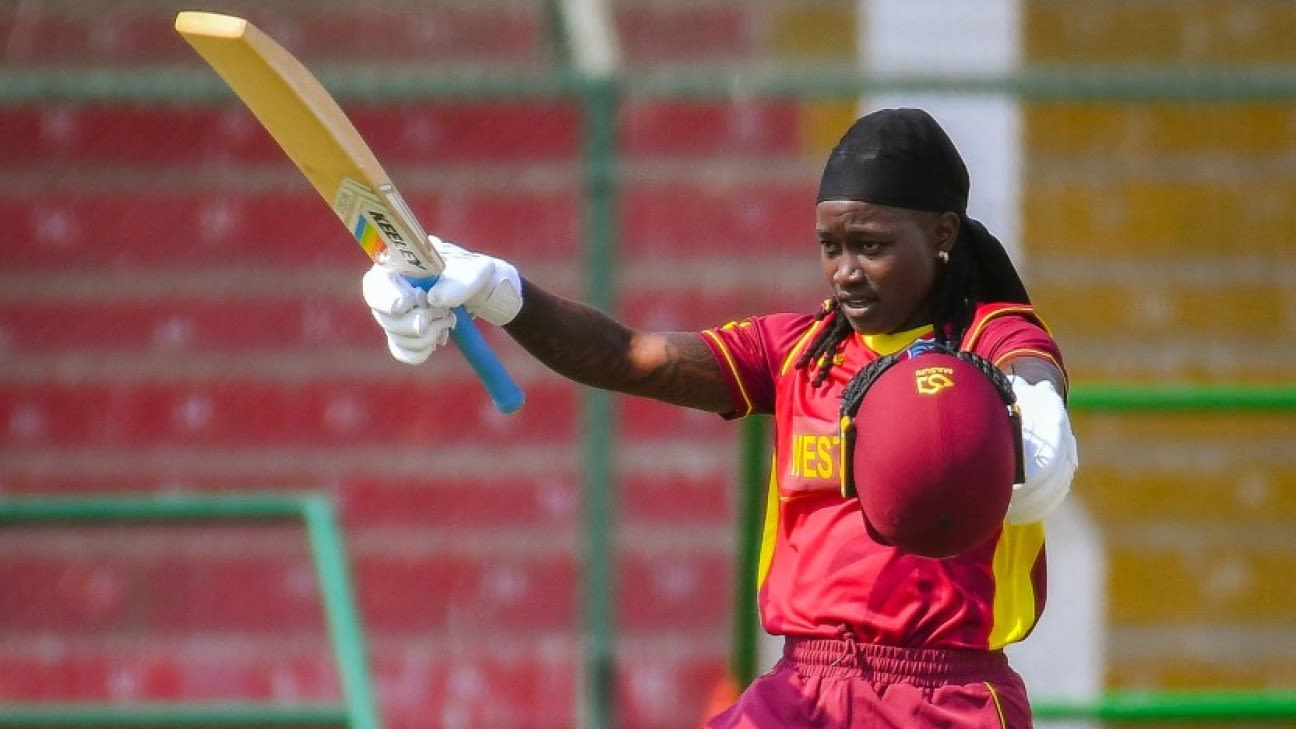 Deandra Dottin's career-best 150* went in vain as rain washed out the first ODI between South Africa and West Indies in Johannesburg with a result possible after only another less than three overs of play.
The hosts were 87 for 5 in 17.4 overs while chasing a revised target of 204 in 29 overs before rain arrived to abandon the fixture. While they were on track at 41 for 1 in the ninth over, a mini collapse triggered by Hayley Matthews and Karishma Ramharack reduced them to 63 for 4 in the 14th. A brief recovery from Mignon du Preez and Chloe Tryon saw them add 24, before Ramharack had Tryon in what turned out to be the final ball of the match.
Earlier, West Indies posted 234 in the 45.3 overs that rain allowed them to bat in, having themselves got back on track after two early wickets - both Rashada Williams and Kycia Knight fell for 1, consuming a total of 29 balls - with Shabnim Ismail and Ayabonga Khaka striking for South Africa inside ten overs. Although Dottin and captain Stafanie Taylor then batted for just over eight overs to add 33, Taylor was forced to retire hurt on 12.
That is when another rebuilding began: Dottin and Matthews took the score to 213, thus forming a union of a further 153 runs for the third wicket, with the runs coming at better than a run a ball. Matthews hit 51 off 63 deliveries in the partnership, slamming her first and third balls for four off Tryon. But it was Dottin who soon pressed the accelerator, cracking a six off Khaka in the 24th over, and following that up with 6, 6 and 4 off successive deliveries against Nonkululeko Mlaba in the 25th.
Dottin brought up her century from 113 deliveries, soon after which the first rain break stopped the match after 36.5 overs. But she continued to be aggressive once play resumed, hitting a further six boundaries in the near-nine overs that was possible. Dottin's innings came off only 158 deliveries and featured 18 fours and four sixes, after which South Africa began a rain-curtailed chase.
But almost 18 overs into their reply, it began raining again only for play to not restart, as Dottin's massive innings went down the drain. The second ODI of the four-match series takes place at the same ground on Monday.
Deandra Dottin
Hayley Matthews
West Indies Women
South Africa Women
West Indies
South Africa
WI Women vs SA Women
West Indies Women in South Africa
Read 49 times

More in this category: « Brunt rattles Australia after Knight's magnificent 168 not out India win fifth U-19 World Cup title after seamers Raj Bawa, Ravi Kumar prove too hot for England »
back to top