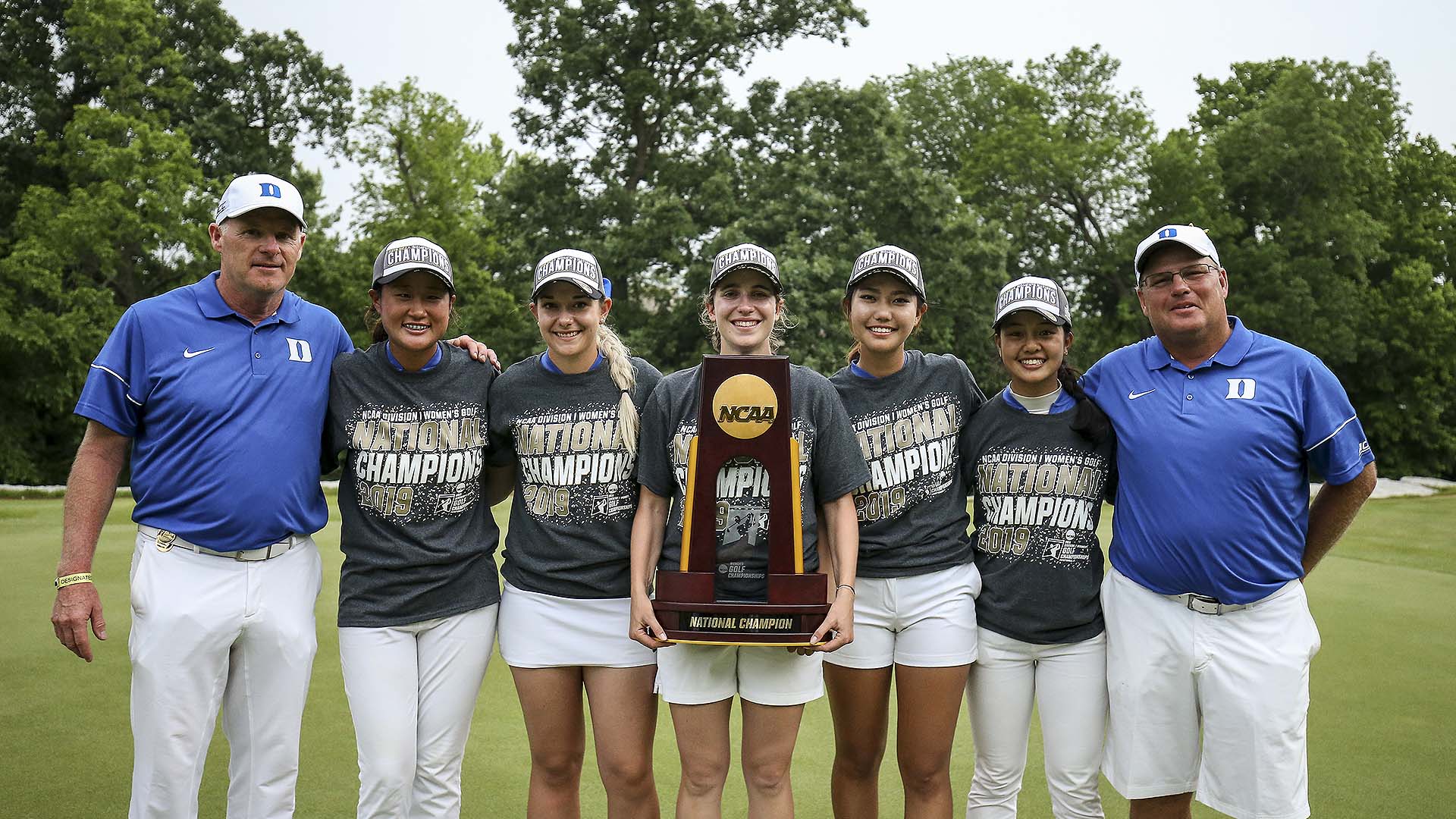 FAYETTEVILLE, Ark. – Jennifer Kupcho came back to school for this moment.

The Wake Forest senior deferred her LPGA membership this spring in hopes of leading the Demon Deacons to their first NCAA team title, and Wednesday at Blessings Golf Club, she and her teammates were on the cusp of achieving their ultimate goal.

But storied Duke University, chasing a seventh national championship, had other plans. The Blue Devils went down to Arkansas and stole victory away from Kupcho and the Deacons in an extra-hole thriller.

Three matches went past the 18th hole, with Duke sophomore Miranda Wang earning the clinching point in a 3-2 triumph on the second playoff hole, the par-5 15th, after Wake freshman Letizia Bagnoli snap-hooked her second shot into the penalty area.

With Bagnoli facing a bogey putt, Wang calmly lagged a birdie roll close and was conceded the winning par. As Kupcho watched in tears, Wang’s teammates mobbed her on the green in celebration.

“I couldn't feel more proud than I do right now,” said Duke’s head coach of 35 seasons, Dan Brooks, who got choked up talking about what his team had just accomplished, fighting through weather delays, multi-round days and close-calls.

Duke’s seventh national title – its first since 2014 and first in the match-play format – ended a four-year winless gap that shockingly spanned the decorated career of former Duke great Leona Maguire. Maguire, a two-time winner and money leader on the Symetra Tour this season, was a two-time Annika Award recipient in college, yet she had never gotten the Blue Devils past the semifinals in three trips to match play.

The Blue Devils’ Achilles heel during the Maguire era – shaky play from the bottom of the lineup – became a strength this year.

“The cool thing about this team is, you know, we went into all of our tournaments with the idea that any one of them individually could win … and that's the kind of team that is a lot of fun [to coach],” Brooks said. “You're going to get contribution [from everyone]. It makes the pairing party a lot easier, too, because we really don't have to sweat much on who plays who.”

On a team featuring four top-50-ranked players, Wang, at No. 148 in Golfstat, was the most unlikely of heroes. The five-spot sophomore missed the final four tournaments of her freshman season with a knee injury. She didn’t notch a top-10 finish this season and skipped this week’s practice round after injuring her right wrist moving out of her dorm.

She carried a bag of ice and an 0-2 match-play record to the first tee Wednesday before falling 2 down after five holes. As Wang held on with halve after halve, Brooks made the executive decision to catch up with Wang on the back nine and walk with her the rest of the way.

“Miranda and I have had a good thing going in the last two months where she has made some changes in the way she thinks out here, and I thought I could possibly affect the change by going with her,” Brooks said. “I felt like if I could get that win, you’ve got some heavy hitters playing against each other that could swing [those matches] one way or another.”

In Wednesday morning’s semifinal match against defending national champion Arizona, Wang nearly came back from a 4-down deficit. She took confidence from that and won Nos. 13 and 15 to square the match, setting up her eventual comeback.

Her teammates reciprocated the effort.

Junior Ana Belac receives a text message from Maguirie before nearly every round. Maguire’s message to Belac before Wednesday’s final was, “Go get it.” Belac went 3-0, capping her week with a 5-and-4 dispatch of Vanessa Knecht to give Duke its first point of the championship match.

Wake Forest’s Emilia Migliaccio also went 3-0 and gave the Demon Deacons their first point with a stiff approach and birdie on No. 18 to defeat Duke freshman Gina Kim, who earlier that morning had delivered an impressive approach on the same hole to set up a match-clinching birdie for the Blue Devils.

Virginia Elena Carta, the 2016 NCAA individual champion and lone senior, is known as the team’s ice-breaker. She led off in each of the three sessions and went 2-1. She prevailed in 24 holes in the quarterfinals and again went into extras Wednesday afternoon, though she ultimately fell to Siyun Liu in 20 holes.

With two Wake points on the board and Wang in a battle, Duke’s top-ranked player, sophomore Jaravee Boonchant, needed to win her match against Kupcho. Boonchant faced the opposing team’s best player all week – she lost to Stanford’s Andrea Lee in the quarters and then fell to Arizona’s Haley Moore in the semis.

But Brooks remained confident that Boonchant, the squad’s only first-team All-American, could finally deliver.

“I think we'd all agree that we'd put money on her,” Brooks said.

Kupcho had not trailed for 48 holes before Boonchant birdied the par-3 17th to take a 1-up lead. Though Kupcho clawed back with a winning par on No. 18, the world’s No. 1-ranked amateur hooked her drive at the first into the hazard. Boonchant routinely made par to send Kupcho packing.

“There are no words to describe it,” Kupcho said. “… It’s the end of my college career. It’s hard to swallow, but I’ve gotten a bunch of texts and I know that I have a big professional career ahead of me.”

Kupcho will tee it up in next week’s U.S. Women’s Open, her first event as a pro. She’ll leave behind an impressive college and amateur career that included last year's NCAA individual title, three first-team All-America awards and numerous school records.

Though Kupcho could barely compose herself to reflect on Wednesday's heartbreak, she has no regrets. Kupcho’s unwavering decision to see her college career to the end paid massive dividends. She gained national notoriety and captured hearts everywhere by winning the inaugural Augusta National Women’s Amateur, the highlight of a “whirlwind” spring, as described by her dad, Michael Kupcho.

“I think that the world has seen it,” Lewellen said, “… she's impacted women's golf by winning at Augusta National, Wake Forest University by being a national champion, but also by deferring her LPGA status to be here with her team and help us get to the final match.”

Kupcho’s winning walk-off never happened. The storybook ending she had hoped would conclude with glory? Well, it did.

The moment just didn't belong to her and her teammates, it belonged to Duke.